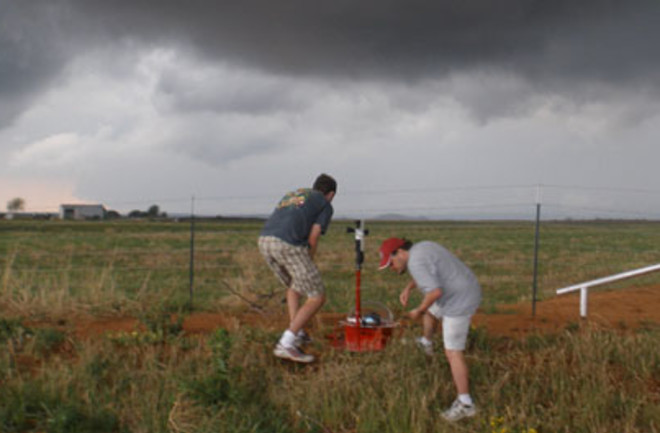 In the Path of the Storm The tornadoes of 2010 were stronger and meaner than any in Reed Timmer’s recent memory. The

star started following twisters more than a decade ago in a 1985 Plymouth Reliant. More lately he has been using a custom supercar that he calls the Dominator; the new season finds him behind the wheel of an even sturdier version, now upgraded with new toys such as a roof-mounted air cannon that shoots parachute-deploying probes into the spiraling vortices.

After three seasons of meteorological mayhem, Timmer’s travels finally bring his team face-to-face not only with storms but with their trails of devastation. In one episode, he halts a chase to aid victims trapped in rubble. Timmer, who just published Into the Storm, a book about his adventures, says such grisly scenes will keep him learning about tornadoes "until I’m 95."Discovery Channel, Wednesdays, 10 p.m. Eastern/Pacific

Dean of Invention Dean Kamen—college dropout turned multimillionaire inventor of wonders like the Segway Personal Transporter and advanced prosthetics—brings his take on innovation to the small screen. Each week, Kamen and cohost Joanne Colan take a globe-trotting tour in search of, as Kamen says, “inventions that will change the way people live.”

In Dean of Invention’s debut, “Meet the Microbots,” Colan journeys to Zurich to find a scientist creating tiny robots that could perform eye surgery. Meanwhile, the consistently denim-clad Kamen meets a pair of researchers in Montreal who are building another type of medical mini-robot to travel through the bloodstream targeting tumors with precision chemotherapy.

We get to see computer-generated simulations of the devices treating disease inside the human body. Kamen is no mere spectator, either. He chimes in to give his inventor’s take on the new technology. Typical: “Good, but not quite perfect.”

The eight-episode run includes shows like “Robot Revolution,” detailing the rise of robots in search-and-rescue and battlefield missions, and “Re-Gen Revolution,” a look at how scientists will grow new organs and tissue in the lab.Planet Green, Fridays, 10 p.m. Eastern/Pacific

The Emperor of All Maladies By Siddhartha Mukherjee (Scribner) Polio surrendered to the advance of medicine. Smallpox, too. “But of all diseases,” Mukherjee writes, “cancer has refused to fall into step in this march of progress.” A cancer physician and prolific writer, Mukherjee is all-encompassing but never boring in this biography of the disease. He follows the struggle against cancer from ancient Greece to the present day, when longer life spans make cancer more common despite the true gains in our war on the illness.

By Brian Switek (Bellevue) Switek seamlessly intertwines two types of evolution: one of life on earth and the other of paleontology itself. In the first he encounters “fossil celebrities,” such as Archaeopteryx, a proto-bird; the “sea-monster” Hydrarchos sillimani (later revealed as a hoax); and Ichthyostega, the four-legged fish that documents life’s transition from sea to land. The second shows how much we owe to Darwin, Huxley, and many others who struggled to untangle humanity’s place in nature in spite of the cultural upheaval that their work inevitably caused.

By Oliver Sacks (Alfred A. Knopf) Sacks dips into his case files again, this time to find the peculiarities in the brain that can hijack its functions somewhere between the eye and the mind. He features an accomplished musician who loses the ability to read music and a man who knows the letters of the alphabet but can no longer comprehend them as words. The doctor/author examines himself as well, narrating his own frightening ordeal with an eye tumor that left him with a blind spot in his vision.

Here Is a Human Being By Misha Angrist (Harpercollins) As an original participant in the Personal Genome Project, writer and ex-geneticist Angrist was one of the first to wrestle with the scary yet thrilling prospect of unlocking his own genes. His absorbing account details both the big business and the sometimes shaky science of sequencing: He follows fledgling biotech start-ups and the big fish gobbling them up, and he faults personal genomics companies for not considering environment and lifestyle in their clients’ genetic assessments.

Edited by Bill Bryson (William Morrow) “How many enterprises can you name that are still doing today what they were formed to do 350 years ago?” So asks the editor of this essay collection, which marks the anniversary of one such enterprise: Britain’s Royal Society.

Neal Stephenson, Richard Dawkins, James Gleick, and other writers trace the society’s unparalleled contributions to science, celebrating not just the famous members like Isaac Newton and Robert Boyle, but also the oddballs.

The Royal Society proves a fruitful jumping-off point, too: Margaret Atwood says its eccentric members were inspiration for literature’s mad scientist; Paul Davies ponders whether 350 years of astronomy have led us to expect a life-filled or a lifeless universe.

The World War I-era Aviatik D.1 and, above it, Sopwith Camel F.1 | Ted Heutter/Museum of Flight

You don’t need to wait around for NASA to go back to the moon to hone your lunar landing skills. Just take a trip to Seattle. At the Museum of Flight, simulators let visitors execute an Apollo lunar module landing. They can also enter the world of an air traffic controller or clamber aboard an Eisenhower-era Air Force One.

More is on the way. The sartorial splendor of “Style in the Aisle”—a look at the flamboyant, futuristic fashions of 1960s and ’70s flight attendants—reopens in January.

The museum is among several bidding to acquire one of the retiring space shuttles. If it is successful, visitors could get an up-close view of the Atlantis, Endeavour, or Enterprise by late 2011.

Bad Religion lead singer Greg Graffin says punk rock and science are both about “not settling for dogma.” He should know: Graffin also teaches evolutionary biology at UCLA. His new book, Anarchy Evolution, details his double life. (See DISCOVERmagazine's interview with him.) Graffin isn’t the only rocker/scientist; others include:

▪ Dexter Holland: The Offspring frontman received a master’s degree in molecular biology, but quit his Ph.D. work to rock.

▪ Milo Aukerman: The Descendents have released only six studio albums in three decades, and one reason is lead singer Aukerman’s passion for plant genetics.