What to read, view, and visit this month 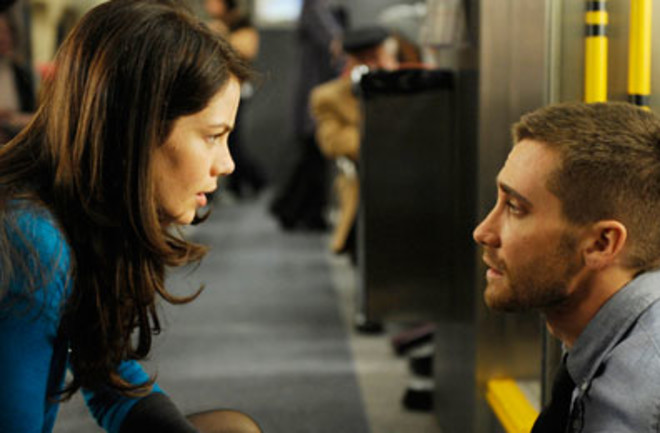 Source Code In his 2009 debut feature, Moon, director Duncan Jones established himself as an impresario of mind-blowing science fiction. Now he is back, throwing us for a different kind of loop.

Source Code stars Jake Gyllenhaal as military man Colter Stevens. Assisted by “source code” technology, he can experience the last eight minutes before a fatal bombing as seen through a dead man’s eyes—and interact with a mysterious woman named Christina (Michelle Mon­aghan, above, with Gyllenhaal). Stevens must do it repeatedly until he spots enough clues to find the culprit.

Fans of Moon (available on DVD) know that Jones loves to put a twist on classic sci-fi plot devices. Source Code poses its own cosmic question: Can reliving the past offer someone the chance to change it? In the right hands, time loops have motivated some of the richest stories in sci-fi cinema:

Primer. Despite its puny $7,000 budget, Shane Carruth’s 2004 cult classic stitched together one of the trippiest movie visions of time travel. Be prepared to watch it several times to decipher the convoluted time line.

Donnie Darko. A decade ago, the psychological trials of a time-displaced suburban loner put Gyllenhaal—and demonic rabbits—on the map.

Groundhog Day. “Well, what if there is no tomorrow?” Bill Murray asks. “There wasn’t one today.” Along the way he learns about a hundred ways not to hit on a smart woman.

Cool It Lionsgate A decade after becoming a pariah to many green crusaders, Danish economist Bjorn Lomborg remains a polarizing force. Cool It, a documentary based on his 2007 book of the same name, continues Lomborg’s cry to rethink the world’s responses to global warming: Abandon toothless agreements about carbon cuts and instead invest in renewable energy, along with geoengineering as a fail-safe. Lomborg delights a tad too much in casting himself as a voice of reason (and the anti–Al Gore), and his film is just as manufactured as An Inconvenient Truth. But in the aftermath of yet another blasé United Nations climate meeting, it’s increasingly difficult to ignore his call to explore a different path. Available March 29

A Geek’s Guide to the Best Online Comics

xkcd. Randall Monroe’s consistent hilarity—interrupted by occasional heart-wrenching seriousness and cosmic awe—has made xkcd the top geek comic on the Web. In xkcd #482, the size of the observable universe is shown on a logarithmic scale, all in one handy panel. www.xkcd.com

Zach Weiner’s dark and zany strip deconstructs science and delves into other geeky humor (below). www.smbc-comics.com

(Piled High & Deeper). Jorge Cham’s dead-on portrayal of the grad student life beautifully decodes the meaning of academic language: “Remains an open question” equals “We have no clue either.”

More absurdist and given to drawn-out jokes than the rest, Abstruse Goose has science punch lines that deliver. In #320, The Flash learns a hard lesson about relativity. www.abstrusegoose.com

Despite the demands of their enormous bodies, long-necked sauropods—those largest of dinos, including the iconic,if misnamed, brontosaurus—flourished for 140 million years. This new exhibit explores the biological machinery that enabled the colossal creatures to thrive. Videos projected onto a 60-foot-long model of Mamenchisaurus (below) reveal its dynamic interior: You can follow a bite of plant food on the long journey through the creature’s digestive tract and watch the action of its hard-working lungs. To appreciate the energy required for a sauropod’s heart to move roughly 100 times as much blood as the human body contains, visitors can use a hand pump to push a digital sauropod’s blood all the way to its lofty head. And if you simply wish to be awed by size, see how your own thigh bone measures up to a Camarasaurus’s. Opens April 16.--Sarah Stanley

Krakenby Wendy Williams(Abrams)One day in 1873, millennia of sea monster myths turned fascinatingly real when Canadian fishermen lopped off two arms of a giant squid that attacked their rowboat and brought them ashore as evidence. Williams’s account of squid, octopuses, and other cephalopods abounds with both ancient legend and modern science. We learn, for instance, that scientists searched for the elusive giant squid Architeuthis by attaching video cameras to the heads of sperm whales. What Kraken lacks in overarching narrative it makes up in authority, wit, and poetry.

Biopunkby Marcus Wohlsen(Current)A 23-year-old mit grad designs a genetic disease risk-assessment test in her apartment. A 25-year-old converts an old shipping container into a mobile wet lab. These vivacious characters are trying to “increase the tinkerability of biology,” as the father of one of Wohlsen’s characters explains. Even more amazing and chilling: The real world-changing research is yet to come.

Periodic Talesby Hugh Aldersey-Williams(Harpercollins)With a distinct British wit and a zest for science history, Aldersey-Williams turns his boyhood passion for the chemical elements into an insightful biography of the periodic table’s denizens. The author travels all over the cultural map, from golden statues of Kate Moss to the biblical obsession with sulfur. Be prepared to laugh along with his attempts to re-create centuries- old experiments, including extracting pure phosphorus from his own urine.

Quantum Manby Lawrence M. Krauss(W. W. Norton)Though far from the first biographer to take on Richard Feynman, Krauss admirably interweaves parallel tales of the brilliant physicist, the womanizer, and the celebrated wit—and cuts through Feynman’s self-mythology. The author explains the development of quantum electro­dynamics with the same breeziness with which he shows how the collaborative spirit of the Manhattan Project (and simultaneously losing his young wife) steered Feynman toward his legendary discoveries.