Reviews of science reads that explore abominations, immortality and parasites. 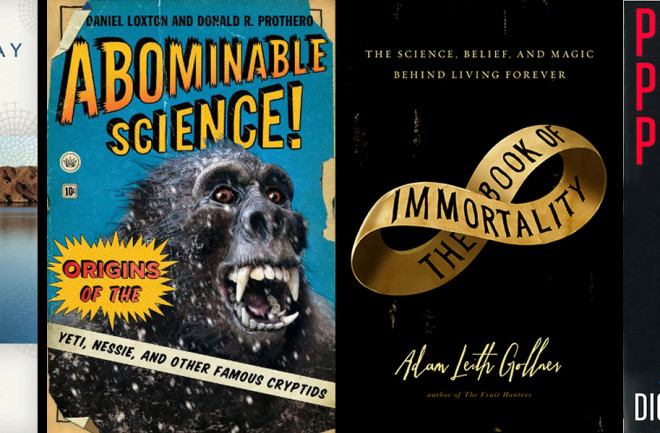 Telling Our Way to the Sea

In his first book, evolutionary biologist Hirsh dives into the murky issues surrounding the conflicted history and uncertain future of Mexico’s Sea of Cortez. Students accompanying him to study the ecology of one of its bays see the waters as a pristine wilderness, but to scientists like Hirsh, it’s an overfished wasteland — meanwhile, foreign investors eye the shoreline for development with mixed reactions from local fishermen. Although occasionally lapsing into the Latin-laden jargon of a classroom lecture, Hirsh is articulate and impassioned as he struggles to figure out his own role in the future of the bay he loves. Moments such as a blind student’s tactile impressions of a sea cucumber serve as springboards for ruminations on a natural world far bigger and more complicated than any one person’s perception of it. — Breanna Draxler

It probably wasn’t Bigfoot you heard go bump in the night, but wouldn’t it be cool if science could prove it was? Skipping cryptozoology’s usual sensationalism, Abominable separates history and folklore from hoaxes and fakelore. Discussion of the yeti, Nessie and their ilk includes analysis of “believer” psychology, exploring what’s behind faith in the fantastic. Occasionally wry but never mean-spirited, skeptics Loxton and Prothero press the field’s proponents to approach their subjects with the scientific rigor necessary to be taken seriously. — Elisa Neckar

The Book of Immortality

Gollner takes readers on a romp through the history of our quest for immortality and the science that may (or may not) help us achieve that goal. From humans’ earliest notions of everlasting life to the science that went into a $200 thimble of resveratrol eye cream, Gollner deftly weaves a narrative as amusing as it is smart. His juxtaposition of insights from his favorite professor — a witty and grounded Jesuit priest facing his own mortality — with magician David Copperfield’s ruthless quest for the fountain of youth leaves little doubt where Gollner stands on the issue, but it may make some Immortalists rethink their priorities. — Becky Lang

Don’t let the menacing teeth on the cover scare you. Save for one photo, you won’t lose your lunch as Despommier explains how parasites can find a nice, comfy spot in your gut and wreak havoc on your body from the inside out. The microbiologist even suggests how we can use their wicked ways to our advantage: isolating, for example, the gene that allows a parasite to suppress our immune system and using it to reduce the risk of rejection for transplanted organs. Parasites beautifully balances history and pathology, but it could benefit from more vignettes. Then again, maybe we should be careful what we wish for. — Dave Lee