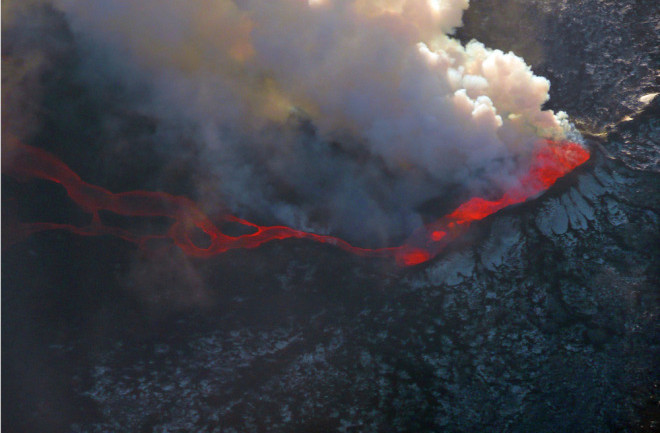 Part of the Holuhraun eruption in Iceland, seen on October 21, 2014.

Milan Nykodym / Flickr If you can believe it, we're now in the fourth month for the Icelandic eruption that started north of the Bárðarbunga caldera in Iceland. The world watched and waited for this eruption after weeks of intense earthquakes, but since the eruption began in late August, we've had a nearly constant stream of basaltic magma eruption from the fissures in the Holuhraun lava fields between Bárðarbunga and Askja. This eruption has drifted from the headlines because the eruptive activity itself has been fairly tame -- no giant ash plumes to disrupt air travel across Europe, but instead just a steady flow of lava creating a new lava field that covers over 72 square kilometers (~17,700 acres; see below). You can watch some great slow-motion footage of the lava erupting at one of the main vents, taken October 27 by Karl Neusinger - it really shows the constant influx of lava from below that creates the impressive lava flow field. This eruption at Holuhraun now has the distinction of being the largest (by volume) in Iceland since the massive 1783-4 eruption of Laki (although Holuhraun trails Laki by "only" 16 cubic kilometers of lava!)

The Holuhraun lava field (shown in white outline) and the active vent seen by Landsat 8 on November 16, 2014.

University of Iceland Institute of Earth Sciences / IMO. The biggest hazard produced by the eruption so far has been to the air quality in Iceland, where the sulfur dioxide emissions from such a constant and vigorous basaltic eruption has meant that people have been required to stay indoors during much of the summer and fall months on the island nation. Analyses of the rainwater in Iceland over the past months show that as much as 40% of the rain that has fallen is acidic (pH <7) with some rain as low as pH 3.5 (as John Stevenson put it, that's like grapefruit juice rain). At Bárðarbunga, the floor of the caldera has continued to subside during this whole eruption without much signs that any eruptions have occurred under the ice that fills the caldera (however, the increased heat from the geothermal system may have melted some of that ice). That, in itself, is interesting and tells us something about how some of these Icelandic calderas can form. Instead of the catastrophic events that many people envision for caldera formation (e.g., Crater Lake), these are slow subsidence events that might takes months to occur. Calderas at other large shield volcanoes have also formed in this fashion, but to be able to measure the motion so precisely is a great scientific bonanza. Large earthquakes are still occurring under the caldera as well, with a M5.4 happening just yesterday (November 18). The NASA Earth Observatory recently posted an image of the plume from the Holuhraun fissure that shows how the plume itself might interact with the clouds around the eruption. More likely than not, eruption plumes can play a role in cloud formation and distribution around a volcano.