The tiny spheres, evidence of a long-ago asteroid strike, are smaller than grains of salt. 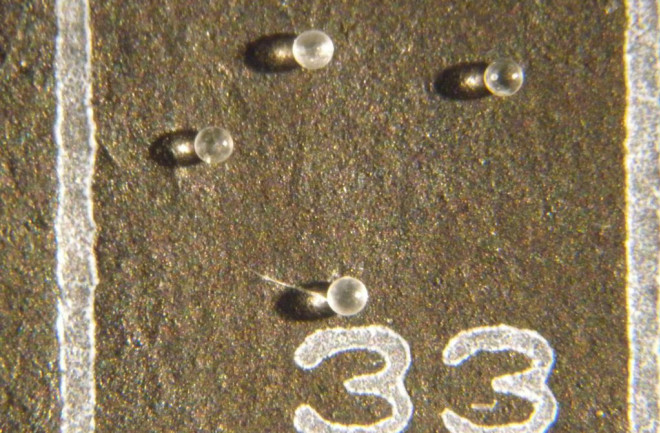 In 2006, an undergraduate student from the University of South Florida named Mike Meyer spent his summer collecting fossils from the walls of a quarry. In typical intern glory, his job was to pry open fossilized clams and wash away sediment, looking for shells of long-dead single-celled organisms.

Instead, he found what appeared to be miniscule glass balls, smaller than grains of sand and almost perfectly spherical.

More than 10 years later, Meyer, now an assistant professor of Earth systems science at Harrisburg University in Pennsylvania, returned to his strange find. He discovered that they are microtektites, tiny glassy beads formed when an asteroid slams into Earth and melts or vaporizes the ground around it. This is the first time microtektites been found inside other fossils, and it hints that Florida may be home to a previously unknown large impact site. Meyer and his colleagues published their findings May 6 in the journal Meteoritics and Planetary Science.

Meyer, then still a student, asked other researchers about his mysterious find, but no one could tell him what they were. So, he kept 83 of the small spheres in a box for over a decade before his curiosity got the better of him. He mounted his mystery objects on slides, setting down dots of glue and then licking a paintbrush to pick up the tiny spheres and move them.

“I did accidentally eat a couple of them,” Meyer said.

He analyzed the chemical makeup of the remaining spheres. Their obviously glassy appearance suggested a few options: volcanic rock, microtektites, micrometeorites, or perhaps some industrial process like coal ash.

After comparing his samples to these options, Meyer found they most resemble microtektites, but there are still questions. For one, the vast majority of tektites of any size have been found in only a handful of sites around the globe, and Sarasota County, Florida, is not one of them. For another, the spheres have a high sodium content. Tektites are created when a large space rock plows into the ground, shooting out material at high speed. This energetic process tends to boil away volatiles like sodium. Its presence in these tektites indicates that either the impact was very close, or that it hit a large reserve of salt – like an ocean bed.

So it’s likely that Meyer has discovered not only microtektites in a new hiding spot – inside clam fossils – but also a new impact site somewhere close to his dig site from 2006.

However, the quarry where Meyer once hunted extinct clams on his summer break is now a housing development, so follow-up work will be complicated. “Such is the nature of Florida,” Meyer said.

Meyer points out that while researchers may not have known to search for signs of an impact here, researchers have spent considerable time hunting up mollusk shells in the region. It’s possible that more samples are waiting, either inside long-dead shellfish, or perhaps in some other geologist’s desk drawer.