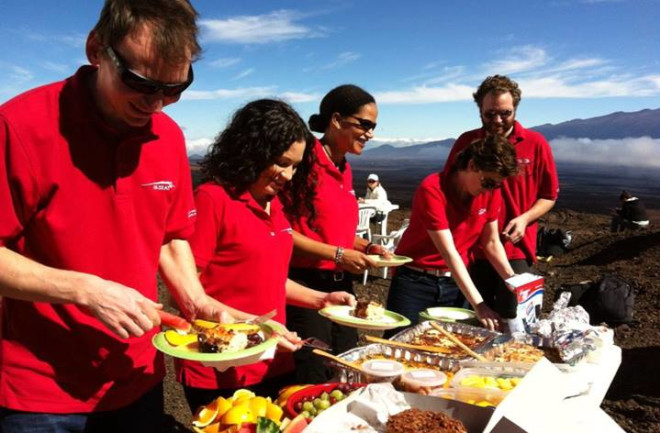 Upon leaving the habitat the crew was greeted with their first fresh meal in four months. Image courtesy HI-SEAS. Two weeks ago the HI-SEAS mission ended and the crew stepped beyond the dome into the morning sun. For the first time in four months, we were able to walk outside, unencumbered by spacesuit simulators. My crewmates talked about a newly recognized visual crispness they saw. Pebbles underfoot and distant mountains seemed to pop, they told me. I can’t say I saw this phenomenon. But I was acutely aware of the cool breeze against my skin. We were greeted by reporters, held a brief question-and-answer session, and were treated to a buffet of fresh fruits and vegetables. There were breads, donuts, and egg casseroles too, but I couldn’t stop eating carrots and celery. Their crunch in my mouth was addictive. The next couple of days were spent in “debrief” mode, where we talked about the mission with Kim Binsted, one of the principal investigators on the project. Then the crew scattered for vacation and travel back home.

The HI-SEAS 2013 mission, with a focus on possible food systems for Mars exploration, is now complete. The crew generated and collected roughly four months of data about what we ate, how much we weighed, how well we breathed and how well we identified various odors, and how we felt about ourselves, our crew, and our time inside a bubble. But the science of our HI-SEAS mission is far from done. While the time for data production and gathering is over, we who conducted studies will spend months sorting, cleaning, and analyzing data so that we can make sense of what actually happened. This is science, and science takes time. Still, there is a sense that we as a crew proved the feasibility of the site, showing that HI-SEAS is a place to test protocols and systems for future excursions to other planets. In this way, the mission is already a solid success.

The Hab Lives On

And there is more good news: in June, NASA awarded $1.2 million to the HI-SEAS program to continue Mars analog research. Over the next three years, the Mauna Loa site will host three more missions of four, eight, and twelve months in duration. These missions will focus on the psychology of the crew. Co-investigators Kim Binsted (University of Hawaii), Jean Hunter (Cornell University), and a number of other research partners will carefully examine crew composition, team cohesion, and group dynamics. The upcoming HI-SEAS missions will also provide the opportunity for follow-on experiments for the food study and other projects conducted by our crew. Stay tuned for a call for applicants. As for me, I have a lot of processing to do. I refer to not only the data I collected from my sleep experiment, but also to the entire experience of isolation and living so closely with a team of five other people under the constrains of a simulated Mars. It was an experience unlike anything I've ever done, and I have some stories to tell. So, I’ll be writing a feature about my time on Mars for the pages of Discover magazine: the end-game, the manned mission to the Red Planet that so many people are hoping for, and how simulating Mars on Earth will help us get there. Until then!