Hey, the stupid really DOES burn

So there's a video of actress Jessica Simpson which is burning up (hahahahahahaha!) the internet right now. Her friend gave her an ear candle for Christmas, and she's using it in the video: I love this video, for a lot of reasons. First, as should be obvious to anyone who prefers not to set their head on fire, ear candling is dangerous and ineffective. Unless you're trying to set your head on fire. Then it's very effective. Second, Ms. Simpson clearly thinks this is a bad idea as well. She titled the video "Who gives this kind of candle for a christmas gift?", and her reactions to it in the video is pretty clear. I love how one purported benefit of ear candling is relief of vertigo, but Ms. Simpson complains of nausea constantly in the video. Third, and related to the second, the video shows how painful and awful this procedure is. It may set antiscience "alternative medicine" back a thousand years. Which is where alt-med is anyway. So I guess that's a wash. Fourth, it makes me wonder if anyone has sent Ms. Simpson to this website. I'll refrain from commenting on any potential video of that. Fifth and finally, it gives me a chance once again to use this drawing, which has been lonely lately: 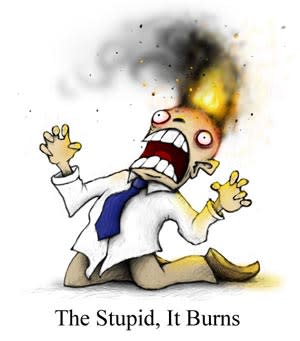