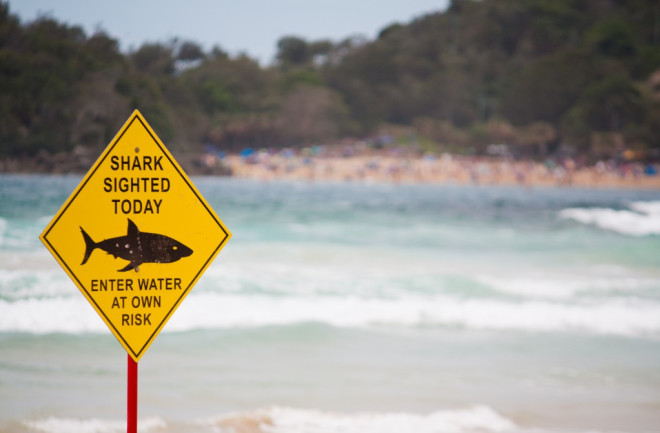 Experts urge for more signs like this and other effective ways of protecting beachgoers. Credit: Shutterstock Given the enormous backlash to Western Australia's ill-conceived shark cull last year, you would think that government officials would have come to realize that killing sharks is a terrible way to respond to shark bites (more than 100 shark scientists and 2/3 of Western Australians opposed that cull). But it appears that authorities in North Carolina have not learned from others' mistakes: Oak Island Town Manager Tim Holloman announced this week that following two life-threatening bites, officials would "take appropriate action" and "eliminate" any shark they deem a potential threat. According to the L.A. Times:

If officials see aggressive behavior from any sharks near shore, such as darting in and out of the surf line or coming within about 100 feet of the beach, Holloman said, the officials are prepared to euthanize the animal. “If they look like they’re posing a danger, we will authorize that action,” Holloman told the Los Angeles Times.

Let me be extremely clear: what happened to the two teenagers in Oak Island, N.C. this week is awful. My heart goes out to them and their friends and relatives. They have survived something terrible and life-altering, and I hope that they are being well supported and cared for. But killing any shark that comes within 100 feet of shore or displays "aggressive behavior" will not return their limbs — nor will it prevent anyone else from losing theirs. "It is always tragic when something like this happens," said Dr. Melanie Hutchinson, a shark scientist with the University of Hawaii, "but emotional reactions are not the best way to deal with natural resource management issues and public safety concerns."

North Carolina shark attack witness says it was like a scene from Jaws http://t.co/uKABrfvjxF

A spotlight is certainly shining on the small town right now. But the media frenzy has exacerbated fears, and Hutchinson worries that "irresponsible reporting" and "inflammatory catch phrases" are making matters worse. After all, it cannot be stressed enough that this type of incident is extremely rare. In the past eighty years, there have been a total of 52 shark bites off of North Carolina

, an average of less than one per year. And even in more risk-prone areas like Florida, back-to-back incidents are nearly unheard of. "It's extremely rare that you get two shark bites in the same day in such close proximity," said Chuck Bangley

, another shark scientist and a PhD candidate in Coastal Resources Management at East Carolina University. "This is just highly unusual." "It is important to keep in mind the relative risk of these types of incidents when deciding on the appropriate policy response," explained David Shiffman

, a PhD candidate at the University of Miami and renowned shark expert. "You are more likely to be killed by a lawnmower, a cow, or a toaster than by a shark." The scientists are sympathetic to the situations Oak Island officials are in. "I understand the need to at least seem like you're doing something until you have a plan," said Bangley. But he's disappointed that killing sharks seems to be the first idea that the authorities have come up with. "The whole thing reeks of something that was really hastily put together and not necessarily well thought out." The science on the subject is more than clear: shark culls don't work

(at least in terms of actually preventing incidents — they are quite effective at killing sharks). "There is not any evidence from any part of the world that shark culls reduce shark bites on humans," Hutchinson noted. Not only is culling not scientifically justified, the manner in which the crew plans to institute this particular cull is especially ill-advised. If the goal is to kill the shark responsible, then the authorities are unlikely to succeed in the first place. Sharks move around a lot, so even if one wanted to take out a shark that bit someone, the odds of finding it are slim. "We already know from satellite telemetry and even conventional tagging studies that the sharks may stick around in one particular spot for like a day or two, but they're usually miles and miles away by the time you actually have a chance to do anything," said Bangley. A closer look at the way "dangerous sharks" are being defined, though, shows that the local authorities are poorly educated in shark biology and behavior in general. 'Darting in and out of the surf line' is "an absurd definition of 'aggressive behavior'," says Shiffman. It also targets the wrong species of shark, says Bangley. "Most of what they're going to be hitting in that case are going to be blacktip and spinner sharks

, which are really not that dangerous to people," he said. "It'd have to be a bull or a tiger shark just to be capable of removing a leg entirely." "They're not only going to be missing the individual shark, they're likely to be missing the species entirely that was responsible," he said. "They're basically just going to be killing a lot of sharks that had nothing to do, whatsoever, with the attack." Furthermore, the method of culling is reckless and inhumane. Most shark culls catch and kill sharks using trained fishermen and drum lines or gill nets. Currently, the North Carolina strategy is to have sheriff's deputies "armed with regular service weapons" patrol the beaches by boat and helicopter. Holloman used the word "euthanize" when he described the plan to some members of the media, but Hutchinson points out that killing a healthy animal isn't euthanasia by definition

. Personally, I highly doubt that shooting a shark with a police firearm would be approved by any animal ethics board in the US, as it's not likely to "induce the most rapid and painless and distress-free death possible

." But whether it's euthanasia or just plain killing, it's a bad idea. "The whole idea of having live ammunition in the surf zone," Bangley notes, "seems like it would actually be less safe for bathers than the sharks themselves." "Killing every shark that someone sees approaching the shoreline will not significantly reduce the risk of sharks biting swimmers, a risk that is already extremely low. However, it will have significant environmental impacts," Shiffman noted in a public statement

. "Sharks play a critical role in the coastal environment that so many North Carolinians depend on for employment, food and recreation. Many species of sharks are already overfished, and 24% of all species of sharks, skates and rays are listed as Threatened with extinction by the IUCN Red List." Tim Holloman did not reply to a request for comment about the town's response. Here's what I don't get: when someone gets seriously injured in a car crash, you don't see the officials running around slashing tires or impounding vehicles to prevent the next deadly crash. (Maybe they should — more than 43,000 people in the United States die each year

in transportation-related incidents. Road traffic injuries are the fourth highest cause of death globally

, and removing cars would have positive ecological side effects, rather than negative ones.)

When someone gets killed by a cow

— and such incidents are surprisingly frequent

— no one takes it out on the cow responsible, let alone every other cow that happens to be in the area. Heck, even with other large predators, when retribution is sought, there is usually an effort to find the "right one" rather than a catch-and-kill-all strategy. So why does the knee-jerk reaction to shark bites always seem to be local extirpation of multiple shark species? What is it about sharks that makes us so much more fearful, so much more explosively reactive when tragedies occur? There are lots of other options

available to the town of Oak Island; the deputies could catch the sharks and release them offshore, for example, a strategy that helped reduce shark attacks in Recife, Brazil by 97%

. "In other regions where shark incidents occur the standard protocol is to close the area for at least 24 hours and dispatch lifeguards and other ocean safety personnel to monitor for shark activity," Hutchinson said. "Seems to me like a pair of eyes scanning shallow water for feeding motivated sharks and warning beach goers should be an obvious course of action... especially since there is an exponentially larger death rate in North Carolina from drownings than shark incidents." Bangley echoed her sentiments. "I would think the money that the beach spent to have people riding around in helicopters, would probably be more wisely put to use just stationing some lifeguards along the beach." "If they're not willing to hire lifeguards then at the very least put up some signage or something, warning bathers that there have been sharks in the area," he added. "It does seem a little extreme to me that they've gone straight into shark hunt without actually closing the beach. That seems like mismatched priorities."