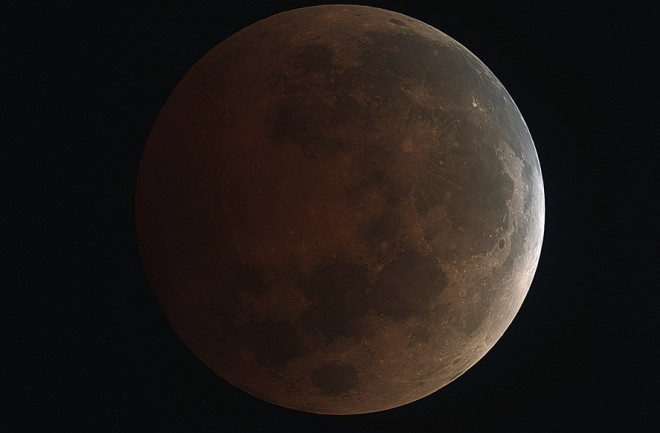 On October 8, 2014, the Full Moon passed into Earth's umbral shadow and created this stunning total lunar eclipse. On January 31, observers across more than half the globe can witness a similar event. (Credit: Damian Peach) On the morning of January 31, people with clear skies across western North America will have front-row seats to the first total eclipse of the Moon since September 2015. For 76 minutes, the full moon will lie completely immersed in the darkest part of Earth’s shadow, and the only light hitting the Moon will be the reddish glow from all of our planet’s sunrises and sunsets. But don’t fret if you live farther east — residents across the eastern half of the continent will still see an impressive partial eclipse. The eclipse promises to gain extra publicity because it coincidentally lines up with two other lunar events. The Jan. 31 full moon is the second of the month, so it also will be touted as a “Blue Moon.” And it so happens that this is 2018’s second-closest full moon, and thus the year’s second largest, which no doubt will compel some people to label it a “Super Moon.” From North America, the eclipse occurs before dawn and delivers better views to those who live farther west. The eclipse action starts when the moon first touches the lighter, outer part of Earth’s shadow, called the penumbra, at 5:51 a.m. EST (2:51 a.m. PST). [See the table below for eclipse times in all time zones.] Unfortunately, the penumbra imparts only a subtle darkening to the lunar surface, and few observers will notice more than a dusky shading on the moon’s western half.

The real show begins when the moon crosses into the darker, inner part of Earth’s shadow, called the umbra. East of a line that runs from the Ohio-Indiana border to New Orleans, this happens after twilight begins, and the eclipsed moon sets before the onset of totality. The umbral shadow appears black in contrast to the rest of the moon, which remains bathed in bright sunshine. People in the western two-thirds of the continent can view at least some of the total phase, and all of totality is on display west of a line that runs from central North Dakota to New Mexico. Viewers in Northern California, Oregon, and Washington get to witness the concluding partial phases as the moon exits the umbral shadow. Totality lasts 76 minutes. Typically, the moon takes on a dull orange to reddish hue during this peak phase. At first, the color may seem surprising — after all, how can light get into our planet’s shadow? If Earth were an airless planet, the shadow would be pitch black and the eclipsed Moon would vanish. But our atmosphere acts like a filtered lens, bending red sunlight into the shadow and scattering out blue light. It’s the same reason why sunrises and sunsets appear reddish. If you were an astronaut standing on the moon during totality, you would see Earth eclipsing the Sun. Earth would appear as a dark disk surrounded by a brilliant but thin ring of red — our atmosphere glowing with the light of all the planet’s sunsets and sunrises. This is the light we see bathing the moon during totality. Although the exact color depends of conditions in Earth’s atmosphere, expect the northern half of the moon to appear darker because it passes closer to the center of Earth’s shadow. North America won’t be the only continent to see totality. Viewers across the Pacific Ocean, Australia, and eastern Asia will witness the event on the evening of Jan. 31.