Here's what the the northern lights look like from 512 miles up in space: glowing swirls of diaphanous fog 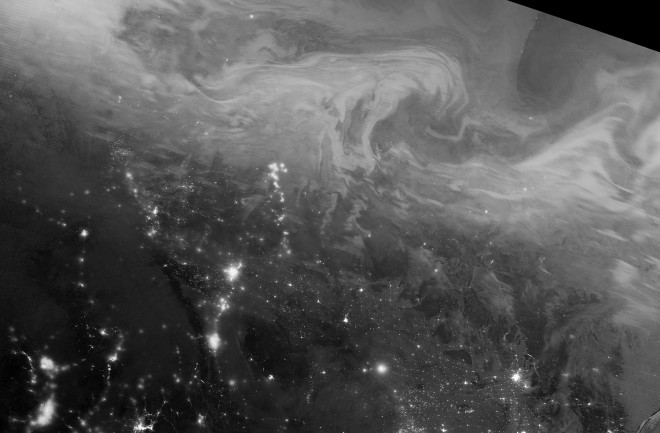 The VIIRS instrument on the Suomi NPP satellite captured this view of the aurora borealis during the nighttime hours of Dec. 22, 2016. The northern lights — those swirling, almost cloud-like features along the top of the of image — stretched across British Columbia, Alberta, Saskatchewan, Manitoba, Nunavut, and Northwest Territories. The point sources of light are cities and towns. (Source: NASA) Just hours after the winter sosltice this month, particles blowing in the solar wind slammed into Earth's magnetic field and kicked up quite the auroral ruckus.

Source: NASA Earth Observatory The Suomi NPP spacecraft, orbiting 512 miles overhead — more than twice as high as the International Space Station — recorded all the action over Canada on December 22. The image above is based on the data that the spacecraft's Visible Infrared Imaging Radiometer Suite, or VIIRs, gathered that night. Click on the thumbnail at right for an annotated image that can help you get your geographic bearings. And to get a sense of scale, check out this broader composite image (compiled using the spectacular SSEC Real Earth tool), showing almost all of North America:

Source: University of Wisconsin Space Science and Engineering Center The swirling fog-like features over northern Canada are, as NASA puts it, the "light emissions" of the aurora borealis. These displays happen when particles from the Sun jostle Earth's enveloping magnetic field, causing major changes in its currents and plasmas. This in turn can send energetic particles raining down into the gases of the upper atmosphere, triggering beautiful auroral glows. Charged particles spew from the Sun's atmosphere, called the corona, all the time, creating the solar wind. This happens because material in the corona is incredibly hot, and therefore moving so energetically that the Sun’s gravity cannot hold on to some of it. Sometimes, portions of the Sun’s magnetic field open out into space. This allows charged particles to stream out at even higher speed — at 2 million miles per hour or more. This creates what scientists call coronal holes.

SEE ALSO: A NASA spacecraft watches as a huge ‘hole’ in the Sun’s atmosphere rotates into view

The stronger solar wind typically triggers even more intense auroral activity. And as it turns out, two large coronal holes were facing Earth on December 22. (To watch a movie I created of these coronal holes using data from NASA's Solar Dynamics Observatory spacecraft, click here.) Of course, the northern lights are not uncommon in winter in the far north. And so the very next day, the VIIRS instrument on the Suomi NPP spacecraft observed a beautiful auroral display again:

Source: University of Wisconsin Space Science and Engineering Center In January, I'll be making what has become an annual trek to Tromsø, Norway, to cover the Arctic Frontiers conference. Tromsø is well above the Arctic Circle, so I'm hoping I'll witness a spectacular display of the northern lights from the ground. If I do, I'll post photos here at ImaGeo.