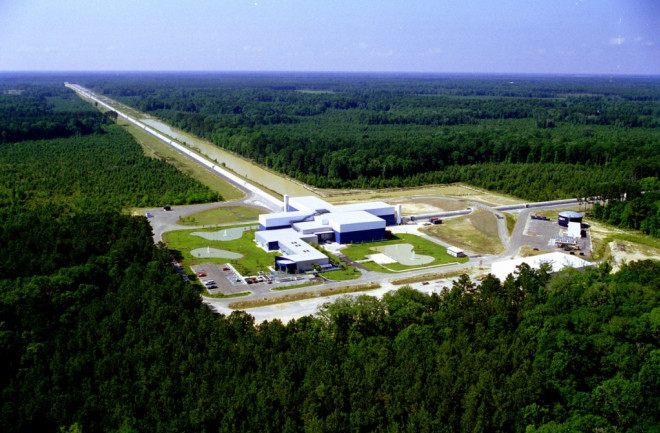 The LIGO detector in Livingston, Louisiana will resume operations on April 1, along with its counterpart in Washinton. (Credit: Caltech/MIT/LIGO Lab) After a year of downtime to perform hardware upgrades, the Laser Interferometer Gravitational-Wave Observatory (LIGO) is ready for action and will turn on its twin detectors, one in Washington state and the other in Louisiana, on April 1. This time, it will also be joined by the Virgo collaboration based out of Italy, and possibly also by the KAGRA detector in Japan later in the year. Combined with the hardware upgrades, scientists expect these updates to allow LIGO to spot more observations and trace their origins more clearly. In 2016, LIGO made history with the first-ever direct detection of gravitational waves, produced in that case by colliding black holes.

“Most of the upgrades have been increasing the amount of laser power that’s used,” says Jolien Creighton, a University of Wisconsin Milwaukee professor and member of the LIGO collaboration. “That’s improved the sensitivity.” Each of LIGO’s detector is a giant L-shape, and instruments wait for passing gravitational waves to distort the length of each arm of the detector, measuring them by bouncing lasers across their lengths. Researchers are also pushing the physical limits of the detector, which Creighton says is limited by the quantum uncertainly principle. To increase sensitivity even more, the experiment will “quantum squeeze” the laser beam. “This puts it into an interesting quantum mechanical state that lets us detect the arm length of the detector,” to even greater precision than before. The additional detectors from Virgo and KAGRA will let researchers triangulate sources on the sky more accurately than the two LIGO detectors can manage alone. Virgo will be online throughout the whole next year of observing, while KAGRA is still being commissioned, but could join as early as fall of 2018.

The upgraded LIGO will look for many of the same events it did before: collisions of two black holes, two neutron stars, or mixtures of both. Creighton says he’s personally excited about binary neutron stars, because those systems are the mostly likely to have counterparts that can be observed by traditional observatories at the same time, at wavelengths from radio waves to visible light to gamma rays. “Seeing more of those will give us more insight into the natures of gamma ray bursts and the formation of elements of the universe,” Creighton says. He points out the mergers can also teach astronomers how matter behaves when crunched down denser than an atom’s nucleus, a state that only exists in neutron stars. “The way we can probe that is by watching the interactions of neutron stars just before they merge. It’s a fundamental nuclear physics lab in space.” Creighton says he’s confident they’ll see many more events from colliding black holes, a phenomenon LIGO has already observed more than once. “We’re hoping to see a binary of a neutron star and a black hole,” Creighton says, but since no one has ever seen one, it’s hard to calculate how common or rare they are, and what the odds are of LIGO spotting one in the next year. But LIGO will be peering farther into the universe, “so even rare things should start to be observed,” Creighton says. Other possible objects LIGO might spy would be a supernova explosion, or an isolated neutron star spinning rapidly. “If it’s not perfectly symmetric, then that rotating distortion would produce gravitational waves,” Creighton says. The signal would be weak but constant, so the longer LIGO looks, the more likely finding a source like this becomes. Even more subtle would be a skywide, low-level reverberation from the Big Bang, similar to the microwave background that exists in radiation, and which researchers suspect might also exist in gravitational waves. “There’s always the hope that we’ll see something entirely unexpected,” Creighton adds. “Those are the things that you really can’t predict in any way.” LIGO’s upcoming run will last for roughly a year, at which point it will undergo more upgrades for a year, and then hopefully start the cycle over again, prepared to witness even more spectacular and invisible events.