Hayabusa2 is Going to Blow a Crater in an Asteroid Tonight 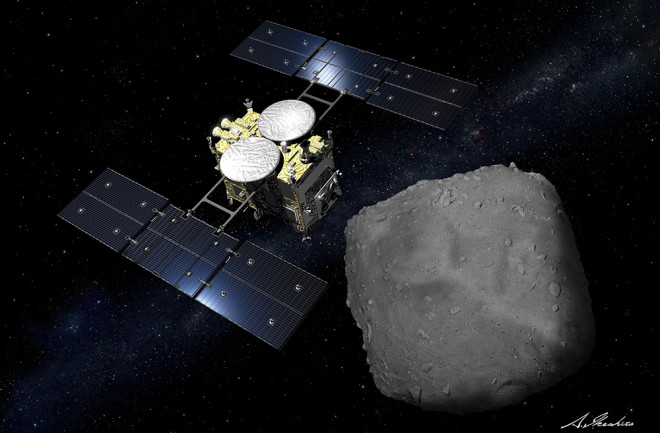 Hayabusa2 is going to blow a hole in the side of its asteroid Ryugu tonight. (Credit: JAXA/Akihiro Ikeshita) The Japanese Hayabusa2 mission has been in orbit around the asteroid Ryugu since June 2018, but tonight is its most spectacular event. In a few hours, the spacecraft will drop off its carry-on impactor, scurry to a safe hiding spot, and then blow a crater into the side of its asteroid home. The spacecraft has spent its time so far studying the asteroid’s rocky and weathered surface, and researchers now hope to get a glimpse of the inside of Ryugu.

The spacecraft will drop off the explosive device (SCI) and a camera (DCAM3) before hiding behind its asteroid and detonating the device. (Credit: JAXA) Hayabusa2 will release its impactor at 11:13 a.m. in Japan, or about 8:13 p.m. E.D.T. tonight. Because Ryugu is a small asteroid with little gravity, the impactor will drift down slowly, taking the better part of an hour to reach the surface. While it descends, Hayabysa2 will skitter sideways just over half a mile and drop off a camera called DCAM3, which will hang out in space above the asteroid at a semi-safe distance. Then Hayabusa2 will turn tail and flee behind the asteroid, hiding from the impending explosion. “That camera can take an image at the moment of impact,” says Makoto Yoshikawa, the Hayabysa2 Project Mission Manager. “We will try to get the image on the same day, but maybe we will need some time to get all the images.” He says that within a few days, they should have images and even video of the explosion. The impactor will detonate some 40 minutes later, probably when it’s still 800 to 1,000 feet above the surface. The point isn’t to make the explosion itself happen on Ryugu’s surface, but instead to fire a large bullet into the ground. The explosion above the surface will hurl a copper disk into the ground at something like 4,500 miles per hour, and hopefully blow quite the hole in the tiny asteroid. Astronomers are hoping for a large crater that will excavate enough material that the spacecraft can see what lays underneath the asteroid’s weathered surface. If that surface proves solid and rocky, the impact should create a bigger hole, perhaps 30 feet across. But if the surface proves lighter and more fluffy (imagine trying to blow a hole in a sand pit), the impact might be only a foot across. “In that case I think it is very hard to find the small crater,” says Yoshikawa. From March 20 to 22, Hayabusa2 zoomed close to the surface of Ryugu to study the area it plans to destroy tonight. Those observations will form the “before” pictures. Hayabusa2 will wait in its hiding spot for two weeks for the debris to settle so it doesn’t get struck with any of the rocks it sends flying above the surface. Then it will repeat its observations from late March to get a set of “after” pictures to compare and hopefully pick out and study the new crater. If Hayabusa2 can find a smooth spot in the crater to set down, it will also perform another touchdown, probably in June, similar to its first touchdown in early March. This means it will fire a much smaller projectile into the newly revealed surface to stir it up again, then collect that material in its sample collection horn. But it’s also possible the spacecraft will find a rugged terrain too jagged to touch down on safely, in which case it will simply observe from above. Hayabusa2 must finish its sample collection by July, when the sun’s rays will heat the asteroid past safe operating temperatures. The spacecraft will stick around until the end of the year, imaging its temporary home, and return to Earth in late 2021, bringing with it the priceless bits of asteroid Ryugu that it collected during its dramatic close encounters.