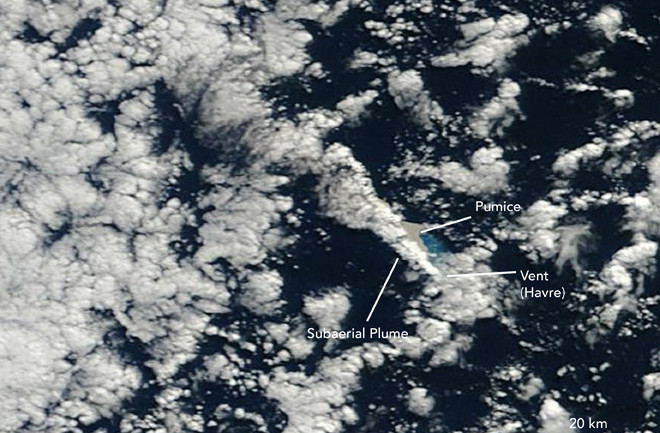 Terra image of the Havre plume and pumice, taken on the morning of July 18, 2012. Courtesy of the NASA Earth Observatory. Note: All images in this post are at approximately the same scale and centered on the same area.{Note: what is described here occurred Friday August 10. Publication was delayed as we waited for the go ahead to publish.} It took some work, but the source and timing of the Kermadec Island pumice raft, north of New Zealand, may have been identified using Terra and Aqua images. Robert Simmon (NASA Earth Observatory) looked back through images of the area and found an ash plume and the beginning of a pumice raft on July 18, 2012, between Macauley Island and Volcano W. Now, you can see that as you flip through images from July 18-21, there is an obvious plume on both the 18 and 19, then only the pumice raft on July 20, suggesting the eruption may have only lasted a couple of days, initially. That was the easy part! The hard part was trying to identify a source. I took the georeferenced Terra image and overlaid it on Google Earth to find the location relative to Macauley and W and then checked out the bathmetry ... and lo and behold, the source of the plume seems to be a U-shaped edifice (see below). This edifice had no label in the Global Volcanism Program Google Earth layer, but after finding a map of the Kermadec Islands, it appears that this is Havre seamount (near Havre Rock), a volcano that we don't know very much about at all. In fact, Havre doesn't even have an entry in the GVP database or really any information about it - heck, it doesn't even show up on many maps of the active Kermadec volcanoes. UPDATE August 13 6:15 PM EDT: Be sure to check out the NASA Earth Observatory side of the story with some new higher resolution images of the eruption as it was starting.

Google Earth Bathmetry of the Kermadec Island area, showing the location of Havre Seamount, the potential source of the pumice raft spotted off New Zealand on August 10, 2012. Here is how we determined that it is likely from Havre Seamount - comparing a Google Earth overlay of the Terra image from July 18th with maps of the Kermadec arc volcanoes.

The location for the eruption that produced the pumice raft first sighted on August 10, 2012. This is a Terra image taken July 18, 2012 (courtesy of NASA) overlain on the Global Volcanism Program's Volcanoes of the World Google Earth layer. The inset map in the upper left is modified from Smith and Price (2006), Journal of Volcanology and Geothermal Research. Havre is circled on the inset map and the plume is circled on the Terra image. The GNS Science press release (which came out after we have convinced ourselves of the location/timing of the initial eruption) on the activity in the Kermadec Islands appears to back up this conclusion based on work done by Alain Bernard at the Laboratoire de Volcanologie. Their approximate latitude/longitude of the eruption matching up with the location of Havre and the plume spotted on the Terra/Aqua images (see above and below), however they don't specifically identify Havre. GNS Science volcanologist Brad Scott noted:

...A short seismic swarm with hydroacoustic and seismic phases on the Polynesian Network on July 17 and 18. The earthquake swarm began on 17 July, 0732h UTC and ended on 18 July, 1405h with more than 157 events, with magnitude between 3.0 and 4.8., probably earthquakes associated with the rise of magma in the eruptive edifice.

Now, this is far from definitive, but I'm fairly confident that this pumice raft is from Havre seamount, with a rough start of the eruption by the morning of July 18, 2012 - and the seismic information from the GNS Science press release (see above) supports this as well. It seems from the Terra/Aqua images that the eruption was pretty much done by July 20 and even on July 19, the plume was much less obvious (see below). By July 21, we had a free-floating pumice raft beginning to spread and by July 30, the pumice raft was stretched widely across the area (both images below). Beyond that, I can't offer too much because we just don't know much about Havre at all. This just shows how easily an eruption can happen in the middle of the ocean and not be noticed for 3 weeks -- even in the 21st century! Now, this is not to say this happens often. Most eruptions will be noticed either as heat spots or sources of sulfur dioxide emissions if not visually on these satellite images. However, sometimes we get the evidence of an eruption well after it happened and have to backtrack through remote sensing data to find the source and in the case of Havre, this was the only way that the source could be found so quickly. Now, to confirm Havre as the source, research vessels will need to head out there and try to find evidence on the seafloor for the eruption, so confirmation might take months to occur. It is exciting, though, to think that we may have witnessed the first historical eruption of a submarine volcano such as Havre.

An Aqua image taken on the afternoon of July 18, 2012. The plume and pumice from the eruption of Havre seamount is clear, along with discolored water from the eruption. Courtesy of the NASA Earth Observatory.

Terra image taken on the morning of July 19, 2012, showing the much more subdued eruption from Havre. The plume, if visible, is much smaller and centered over the vent. Courtesy of the NASA Earth Observatory.

By July 21, 2012, the Terra image merely showing a spreading pumice raft near Havre. Courtesy of the NASA Earth Observatory.

By July 30, 2012, the Terra image shows the pumice spread across a wide area, moving away from the Havre vent region. Courtesy of the NASA Earth Observatory.