Speaking of successful NASA/DOE collaborations, there's an interesting new paper on astro-ph claiming that the Fermi gamma-ray satellite has found evidence for a gamma-ray excess in the vicinity of the galactic center -- similar to what you might expect from high-energy electrons produced by annihilations or decays of dark matter.

The Fermi Haze: A Gamma-Ray Counterpart to the Microwave Haze Authors: Gregory Dobler, Douglas P. Finkbeiner, Ilias Cholis, Tracy R. Slatyer, Neal Weiner Abstract: The Fermi Gamma-Ray Space Telescope reveals a diffuse inverse Compton signal in the inner Galaxy with the same spatial morphology as the microwave haze observed by WMAP, confirming the synchrotron origin of the microwaves. Using spatial templates, we regress out pi0 gammas, as well as ICS and bremsstrahlung components associated with known soft-synchrotron counterparts. We find a significant gamma-ray excess towards the Galactic center with a spectrum that is significantly harder than other sky components and is most consistent with ICS from a hard population of electrons. The morphology and spectrum are consistent with it being the ICS counterpart to the electrons which generate the microwave haze seen at WMAP frequencies. In addition to confirming that the microwave haze is indeed synchrotron, the distinct spatial morphology and very hard spectrum of the ICS are evidence that the electrons responsible for the microwave and gamma-ray haze originate from a harder source than supernova shocks. We describe the full sky Fermi maps used in this analysis and make them available for download.

In English: if the dark matter is a weakly-interacting massive particle (WIMP), individual WIMPs should occsasionally annihilate with other WIMPs, giving off a bunch of particles, including electron/positron pairs as well as high-energy photons (gamma rays). Indeed, searching for such gamma rays was one of the primary motivations behind the Fermi mission (formerly GLAST). And it makes sense to look where the dark matter is most dense, in the center of the galaxy. But it's a very hard problem, for a simple reason -- there's lots of radiation coming from the center of the galaxy, most of which has nothing to do with dark matter. Subtracting off these "backgrounds" (which would be very interesting in their own right to galactic astronomers) is the name of the game in this business. But Doug Finkbeiner at Harvard has for a while now been suggesting that there was already evidence for something interesting going on near the galactic center -- not in the form of high-energy photons, but in the form of low-energy photons. The so-called WMAP haze is alleged to be radiation emitted when high-energy electrons are being accelerated by magnetic fields, leading to low-energy photons (synchrotron radiation). And Finkbeiner and collaborators claim that a careful analysis of data from WMAP (whose primary mission was to observe the cosmic microwave background) reveals exactly the kind of radiation you would expect from annihilations near the galactic center. If that model is right, it gives us some guidance about what to look for in the gamma rays themselves, which Fermi is now observing. And according to this new paper, this is what we see. 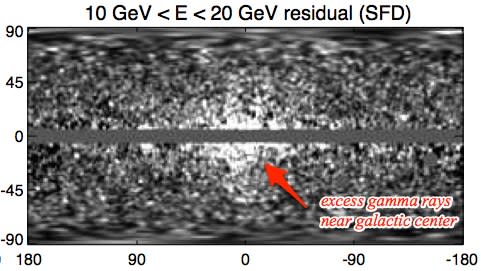 That's one of many images, and has been extensively processed; see paper for details. The new paper claims that there is an excess of gamma rays, and that it has just the right properties to be arising from the same population of electrons that gave rise to the WMAP haze. These much higher-energy photons arise from inverse Compton scattering -- electrons bumping into photons and pushing them to higher energies -- rather than synchrotron emission. So we're not talking about gammas that are produced by dark-matter annihilations, but ones that might arise from electrons and positrons that are produced by such annihilations. The authors pointedly do not claim that what we see must arise from dark matter, or even delve very deeply into that possibility.

There have been speculations that the microwave haze could indicate new physics, such as the decay or annihilation of dark matter, or new astrophysics. We do not speculate in this paper on the origin of the haze electrons, other than to make the general observation that the roughly spherical morphology of the haze makes it difficult to explain with any population of disk objects, such as pulsars. The search for new physics – or an improved understanding of conventional astrophysics – will be the topic of future work.

That's as it should be; whether or not the gamma-ray haze is real is a separate question from whether dark matter is the culprit. But on a blog we can speculate just a bit. Therefore I'm going to go out on a limb and say: maybe it is! Or maybe not. But a wide variety of promising experimental techniques are attacking the problem of detecting the dark matter, and we'll be hearing a lot more in the days to come.