Guest Post: David E. Kaplan on the LHC on the History Channel 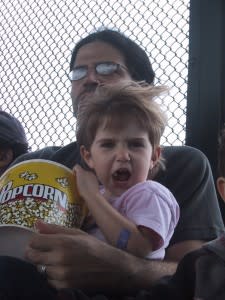 You may have heard that there's some sort of big science machine scheduled to turn on in Europe. Very soon, in fact: first (official) beam at the Large Hadron Collider is supposed to occur around 9:30 Central European Summer Time (3:30 a.m. Eastern, if I have done the math correctly) on Wednesday. Call it Tuesday night, for us West Coasters. The folks at the History Channel recognize the importance of the event, and they've recruited Friend of CV David E. Kaplan, a particle theorist at Johns Hopkins, to host a special show entitled the Next Big Bang. And we, of course, have recruited David to tell you a little about the show. (In the picture, David is the one wearing glasses.) (p.s. This LHC game is surprisingly educational. Via DILigence.) Update: Hey, I guess this is a preview? Well, not of the History Channel documentary in particular, but closely related (and see David struggling with a bad hair day). Via symmetry breaking. ----------------------------------------------------

Hello All. This post represents shameless advertising for a television program which I am hosting on the History Channel this week. The show is a one-hour program about the Large Hadron Collider (LHC) experiment outside of Geneva and will air the day before the first proton bunch circulates the entire 27 km ring (September 9th, 8pm/midnight EDT/PDT, 7pm/11pm CDT, 6pm/10pm MDT). The show will visually describe the complexity and scale of the experiment and some of the potential discoveries we hope to make (the Higgs particle, supersymmetry, dark matter, extra dimensions). For many reasons this is an amazing moment in the history of science (many which have probably been repeated on this blog before). [Indeed -- ed.] There are roughly 75 countries with at least one institution (university or lab) which has contributed to the construction of this machine. The list includes strange bedfellows: India and Pakistan, Israel and Iran and the United States, Greece and Turkey, Russia and Georgia, all of western Europe, most of eastern Europe, some of northern Africa and south America, Japan, China, S. Korea, etc. This unlikely team has constructed the biggest single machine in the history of the planet after over 20 years since the first plans were laid. At 10,000 scientists, this project represents the modern day pyramids. What gets me though is that high-energy physics have not really seen a discovery that has directly shaken the standard model of particle physics for thirty years. The discovery of neutrino masses were a surprise, but fit nicely in the standard model if there is new physics at (unreachably) high energies. Dark matter was certainly a surprise, but could potentially only couple to us gravitationally, and again not uproot the standard model. The same can be said about dark energy to an even greater extreme. However, an unexpected particle has not been discovered since the seventies. The seventies were the time that not only the standard model was discovered experimentally, but its underpinnings, quantum field theory, was confirmed as the correct underlying description of all matter interactions (other than gravitational). The (perhaps, not so) amazing thing is, the surprising discoveries stopped by the end of the seventies, and we have been confirming the standard model even since. The implication is that almost the entire particle physics community, both theorists and experimentalists, who are actively working on LHC physics have never been involved in a surprising discovery. This large community of scientists have been building up to this moment for their entire careers. The scale of these experiments are such that one can really only expect one discovery per generation, and this one is ours. The show is not perfect, but there are some stunning analogies. I did not write the show, but I fact-checked most of it. There is no attempt to scare the viewer with 'disaster scenarios', but simply an attempt to cover what the physicists are constructing and what they expecting or hoping to discover. There is also a bit of history of particle physics. Enjoy the show. I'll stay connected so I can answer any questions that come up. 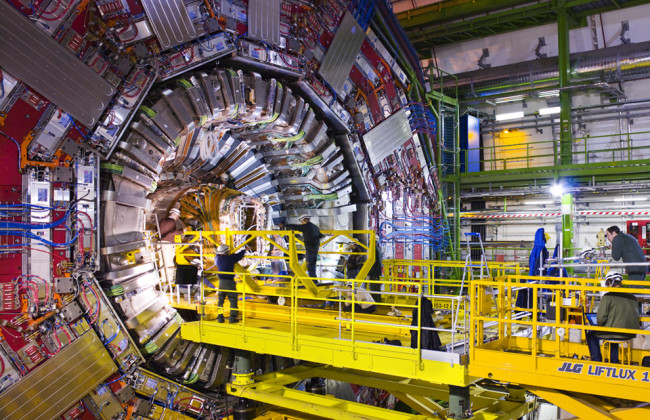 Insertion of the tracker into the CMS detector. Photo by Maxmillion Price, copyright CERN. Click for full size.