Guest Pic of the Day: A Solar Flare Photographed by a Plucky NASA Spacecraft 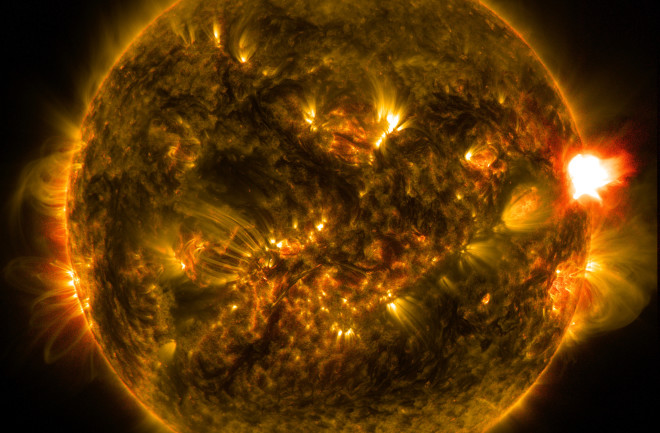 A mid-level solar flare, imaged by NASA's Solar Dynamics Observatory spacecraft on Jan. 12, 2015. (Source: NASA/SDO) Pic of the Day The sun emitted it's biggest solar flare of the year so far, and NASA’s Solar Dynamics Observatory spacecraft was there to capture all of the action. You can see the flare exploding off the right side of the Sun in the image above, acquired by SDO at 11:24 p.m. EST yesterday (January 12th). Here's a brief explanation of solar flares from NASA's Goddard Space Flight Center:

A solar flare occurs when magnetic energy that has built up in the solar atmosphere is suddenly released. Radiation is emitted across virtually the entire electromagnetic spectrum, from radio waves at the long wavelength end, through optical emission to x-rays andgamma rays at the short wavelength end. The amount of energy released is the equivalent of millions of 100-megaton hydrogen bombs exploding at the same time!

I'm publishing this in ImaGeo's almost-daily Pic of the Day feature. Ordinarily, I'd go out and shoot something relevant to ImaGeo myself. But I've been scrambling to prepare for a trip to the Arctic in Norway, where I and two graduate students in the environmental journalism program I direct will be covering the Arctic Frontiers conference next week. So I didn't get a moment today to go outside and take a relevant photograph. (So thank you SDO!) I hope the Sun keeps this up, because Earth-directed solar flares can cause quite a display of the aurora borealis.