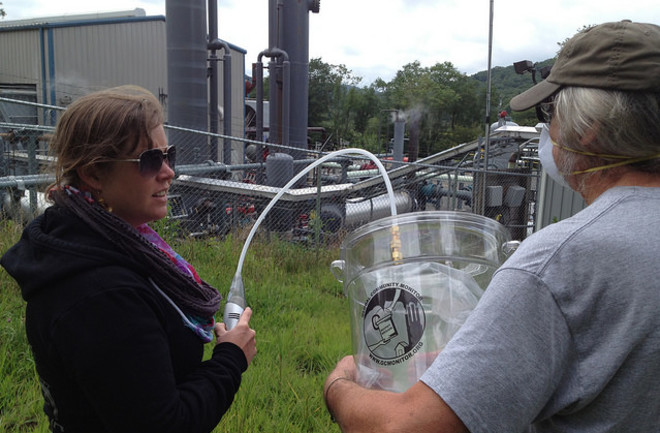 Editors Note: This is a guest post by Gwen Ottinger, Ph.D., an assistant professor in the Center for Science, Technology, and Society at Drexel University. She has done extensive research on community-based air monitoring and community-industry relations around oil refineries. She is author of Refining Expertise: How Responsible Engineers Subvert Environmental Justice Challenges (NYU Press 2013).

A study released last week in the journal Environmental Health breaks new ground in our understanding of the environmental effects of fracking—and shows the power that citizen science can have in advancing scientific research and promoting political action. Unconventional oil and gas (UOG) production, including hydraulic fracturing (fracking), can affect water and air quality. Researchers, including citizen scientists, have studied its impacts on water extensively. But we don’t know a lot about how air quality is affected, especially in nearby residential areas, according to the study, “Air concentrations of volatile compounds near oil and gas production.” Part of the problem is where most academic researchers take samples. Too often, they choose monitoring locations based on the requirements of the National Ambient Air Quality Standards, which look for regional, not local, effects of pollution. When looking at air quality around UOG production operations, they may select sites opportunistically, based on where they can gain access or where they can find electricity for their monitoring equipment. This approach, however, may not produce data that is representative of the actual impact of fracking on air quality. The recently released study pioneers a new approach to choosing sites for air quality monitoring: it mobilizes citizens to identify the areas where sampling was most likely to show the continuous impact of fracking emissions. Citizens chose places in their communities where they noticed a high degree of industrial activity, visible emissions, or health symptoms that could be caused by breathing toxic chemicals. They took samples themselves, following rigorous protocols developed by non-profit groups working in conjunction with regulatory agencies and academic researchers. The result - we now have a lot more evidence to show that UOG production can have a big impact on local air quality. And, as a result of citizens’ involvement in selecting sampling sites, scientists and regulators now have a better idea of where to look to start studying those impacts systematically. The study demonstrates once again the power of citizen science to improve scientific research. But it also shows the political power of citizen science. In a companion report released by the non-profit Coming Clean, the study’s citizen-authors use their finding that air quality is significantly affected by UOG to argue that governments need to be cautious when issuing permits, and to call for more extensive monitoring that includes citizen scientists. Next week, several of the study’s authors—and many other citizen scientists—will convene in New Orleans to cultivate the scientific and political power of citizen science. At the Community-based Science for Action Conference, November 15-17, citizens dedicated to protecting their community’s environment and health will have the chance to try out new technologies for environmental monitoring, share best practices for successful collaboration between scientists and citizens, and learn about the legal and political issues where their science can make a difference. Want to get involved? Registration is still open at the conference’s website. Can’t attend but want to support your fellow citizen scientists? Consider making a donation to help send someone else to New Orleans.