Greatest Hits of Space Exploration in 2014 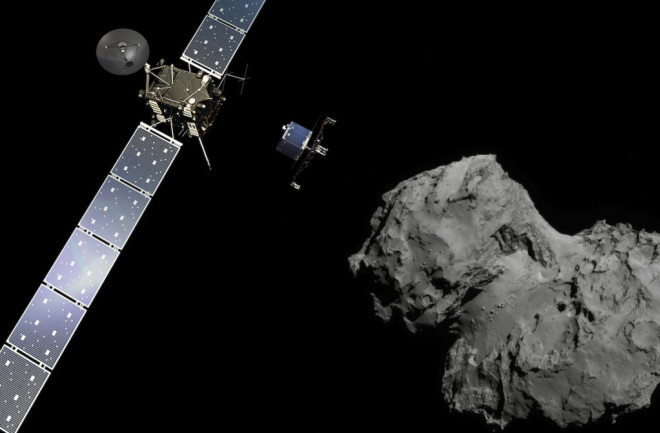 A defining moment of the year: Rosetta watches the comet on November 10 while Philae heads for a landing in this composite illustration. (Credit: ESA/ATG/Rosetta) I’ll admit it, I am a sucker for year-end lists. If I'm reading one, it is a fun provocation for disagreement. If I'm writing one (like now), it is a welcome opportunity to separate the timeless from the ephemeral. Either way, such lists inspire an invigorating reconsideration of the events of the past 12 months--and for those who care about the human exploration of the universe, 2014 was a momentous year in many way. Not all of the year's developments were positive, of course, and not all delivered on their promise. So I'm dividing my list into "hits" and "misses." This post covers part 1--the hits. As you'll see, I am grading on a curve, with bonuses for boldness and demerits for projects with excessive hype or bad cost/benefit ratios. And by nature this is a subjective list. Disagree with my categories? Think I left out something important? Let me know, either in the comments or via Twitter: @coreyspowell. Hits of 2014Rosetta & Philae explore Comet 67P/Churyumov-Gerasimenko. Never mind that nobody outside of the Slavic world can pronounce the comet's name--and definitely never mind that the Philae lander suffered several mishaps during its complex landing sequence--this mission is both a scientific and romantic triumph. Rosetta has already returned staggering images and measurements of the comet, and much of the scientific data has not yet even been released yet. One early result is leading scientists to rethink where Earth's oceans came from. Rosetta will keep watching the comet at least through the end of the 2015, so expect a lot more science to come. The mission is also a technological tour de force for the European Space Agency. China, India, and Japan in space. The Europeans are not the only ones demonstrating fast-improving capabilities. This year China sent a lander and rover to the moon; India completed its first deep-space mission, sending a probe into orbit around Mars; and Japan launched the exciting Hayabusa2 spacecraft, which will rendezvous with an asteroid and bring samples back home. The expanding membership of the global space club is great news for exploration, and offers many opportunities for peaceful technological collaboration. (And for anyone who laments the loss of U.S. leadership, the solution is simple: Let's invest more strategically in our own ventures.)

Mars in living color, seen by India's Mars Orbiter Mission. Gale Crater, home to the Curiosity rover, is dead center in this image. (Credit: ISRO) The rise of SpaceX. Elon Musk and his rocket company are lightning rods for hype and hate, but there is no way to deny that SpaceX has already changed the dynamic of the spaceflight business. The company is finding innovative ways to cut cost while maintaining reliability; is now an integral part of NASA's new private space-ferry fleet for cargo; and has begun testing novel tech (most notably a winged, relandable first stage of the Falcon 9 rocket) that promises further advances in making launches more affordable. Cheaper access to space is a win for everybody, from NASA and big corporations to schools and startups that want to experiment with tiny cubesats. Cassini just won't quit. The intrepid spacecraft has been orbiting Saturn since 2004 and is still returning incredible science, including new measurements of the methane lakes and tar sand dunes on the giant moon Titan; new insights into Saturn's bizarre hexagonal polar winds; and a clear confirmation that there is a sizable ocean under the south pole of another satellite, little Enceladus. With that finding, Enceladus now ranks as one of the most promising places to look for alien life in the solar system. Cassini should keep going until September 15, 2017, watching the ringed planet through one full set of seasons. Kepler won't quit either. After a stunning career searching for planets around other stars, the Kepler Space Telescope lost its ability to aim steadily and seemed headed for the cosmic scrap heap. Instead it is beginning an improbable second act, rechristened K2, using the pressure of sunlight (!) to compensate for its failed stabilizer. As K2 it just found its first new planet around another star. It now searches for different kinds of worlds, complementing other search efforts from the ground and paving the way for the next planet-hunting missions, TESS and CHEOPS.

The watchful eyes of the ALMA observatory, with the sky's south pole in the distance. (Credit: ESO/B. Tafreshi) ALMA observatory opens its eyes. The largest, most complex telescope in the world has a curiously low profile--in part, most likely, because it sees the universe not in visible light but in millimeter waves, which are essentially very short radio waves. (If you have to start every conversation by explaining what you are detecting, that takes away some of the immediacy.) Consisting of 66 linked antennas, ALMA was completed in 2013 but this year it really proved its capabilities with a series of remarkable observations: stars being born, stars dying, and galaxies forming in the early universe. Most impressive of all, ALMA captured an image of planets in the act of forming, clearing out bulls-eye circles in the dusty disk around their parent star. It was like entering a time machine and witnessing the moment when the Earth was born. Bicep2 detects gravity waves from the Big Bang...maybe. Astronomy enthusiasts may question this one as a "hit," given all the negative press heaped on the Bicep2 team after they conceded that the signal they were observing might be local dust, not actual events from the beginning of the universe. Nevertheless, the experimental approach is exactly what is needed to give the real answer. This is how scientists will confirm or refute seemingly untestable ideas in cosmology. Bicep2 and other, related experiments continue to collect data in search of a more solid answer. In another positive development, the criticisms of the Bicep2 results have triggered a closer collaboration with researchers working on the Planck satellite, easing a counterproductive turf war. Orion takes to the skies, but without a crew. The fist test of NASA's new crew capsule, on December 5, was a resounding success. The launch, controls, and reentry went exactly as planned, and in the process it reached an altitude of 5,800 kilometers, making it the first crew-rated vehicle to travel beyond low-Earth orbit since Apollo 17 in 1972. Orion is the kind of capsule needed to explore an asteroid or, in expanded form, to take humans to Mars. Judged on technical points alone, the Orion test is a definite hit. The problems are ones of policy and planning: For now, Orion has only one proposed destination--to visit an asteroid towed into lunar orbit--and that voyage isn't scheduled until sometime around 2024.

Europa Clipper will make 45 swings past Jupiter's large ice-covered moon, some as close as 25 kilometers above the surface. If the mission is funded. (Credit: NASA/JPL) Europa Clipper gets a shot of funding. If Orion is the grim side of politics, the Europa Clipper is the upbeat reverse. Among planetary scientists, Europa is considered one of the most intriguing locations in the solar system. It is covered with ice, but there is a warm global ocean just below, along with evidence of icy plate tectonics and (possibly) water plumes shooting out of the surface. Europa is a natural next destination for exploration, and now a long-running concept called the Europa Clipper looks like it will really happen. In a rare act of scientific passion, Congress allocated an unrequested $100 million to the Clipper project to assist its development. In about a decade, the probe could be scanning Europa for signs of organic chemistry and perhaps even sampling plumes for signs of life.