Gravity to the rescue

Apparently nuclear bombs and Bruce Willis are two things that are just too hard to control. So if a massive asteroid appears to be on a collision course with Earth, a couple of astronauts have invented a new way to save us from this cosmic menace: a gravity tractor. 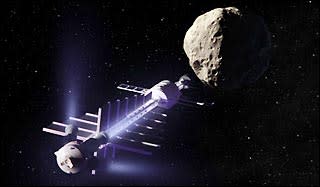 It's a simple enough idea: instead of blowing up the asteroid, just use gravity to gently deflect it from its path. If you have plenty of warning, you can send up a spaceship that is as heavy as you can manage, and simply park it next to the asteroid. The gravitational pull of the ship will gradually tug the asteroid off course; a tiny force, indeed, but if you let it accumulate for a few years you might be able to do the job. I confess to a certain amount of skepticism. The gravitational field of such a ship will be incredibly tiny, and even if you plug in the numbers and it seems to work, I would worry that other trace effects (e.g. outgassing or radiation from the ship) won't be equally important and work in the opposite direction. And when I heard a report about the idea on NPR, there was a curious statement from one of the idea's supporters, that it would work well for asteroids of such-and-such a mass. Where I was taught about gravity, the acceleration is independent of the mass, so that was a little confusing. It may be that the size of the thing is important -- if the asteroid center of mass is too far away from the tractor, you're in trouble, since gravity falls of as 1/r^2. But it's certainly a more sensible idea than the one mentioned by John in an earlier comment, and again at the bottom of the gravity-tractor article: a space vehicle propelled by the pressure of the inflationary vacuum state, recently granted U.S. patent 6,960,975. That's just completely crazy.