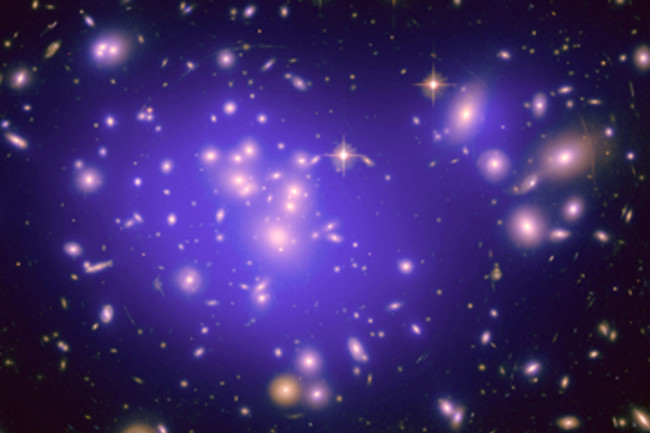 One of the top three priorities for the next decade of astrophysics and astronomy, we noted this week, is unraveling dark energy, the weird force that pushes the universe apart. Given that scientists know next-to-nothing about dark energy—besides the fact that it makes up most of the universe—any step could be an important one. Thanks to a study out this week in Science, astrophysicists at least can have more confidence in this phenomenon that can't be directly seen or measured: Their estimates for dark matter's extent appear to be on target. The technique scientists used in this study is called gravitational lensing, and the lens in this case is a huge galactic cluster called Abell 1689.

Because of its huge mass, the cluster acts as a cosmic magnifying glass, causing light to bend around it. The way in which light is distorted by this cosmic lens depends on three factors: how far away the distant object is; the mass of Abell 1689; and the distribution of dark energy [BBC News].

Gravitational lensing is a trick predicted by Einstein's general relativity, and scientists have used it before to study dark matter (which tends to be a little easier to study than its dark counterpart). But study author Priyamvada Natarajan and her colleagues got such great images from the Hubble Space Telescope

that they were able to map out the dark energy distribution.

Natarajan and her colleagues carefully measured the way each image was distorted to determine how far the background galaxies were from the lens. They then combined that information with data on how far the galaxies are from Earth to come up with a parameter that describes the density of dark energy in the universe, and how the density changes with time. “Knowing exactly where the object is, and knowing about the big lump that is causing the bumps in space-time, allows us to accurately calculate the light path,” Natarajan said. “The light path depends on geometry of space-time, and dark energy manifests itself there. That’s how we get at it” [Wired.com].

, reinforcing the idea that dark energy constitutes nearly three-quarters of everything that is.

It's not clear yet whether having a more refined measure of its presence will bring us any closer to identifying the properties of dark energy, but the fact that it shows up as a consistent value in a number of independent measures suggests that it may not be as mysterious as its name implies [Ars Technica].

So we can breathe a little easier that all that dark energy is really out there—just as long as we can deal with the sting of more cosmic insignificance. Dark energy is thought to comprise 72 percent of the universe and dark matter makes up another 24 percent; that means that the matter making up you and me accounts for only 4 percent of the universe. Related Content: 80beats: Astronomers Announce Priorities: Dark Energy, Exoplanets, Cosmic Origins

Cosmic Variance: The Next 10 Years of Astronomy