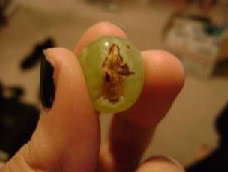 Shades of the smiling grape! A woman in Texas found the Virgin Mary in a grape. I'll admit, the grape does bear a resemblance to the general iconic version of the VM. The good news is that the woman, a Baptist, makes fun of people who see religious figures in stains and such:

"I thought this stuff just happened to Catholics?" she said. "Mom and I had a laugh about it at first, seeing as how we're Baptists and all and we generally don't expect to see holy people popping up in our foodstuffs." "I haven't made a shrine to it, nor prayed to it, nor done much of anything except e-mail the picture to a few friends and roll it around in the bowl in the fridge," Ginn said.

Heh. Well, God bless her heart. But I have to admit getting more of a laugh out of this than usual, due to the ad placement on the story's page. There's a Lane Bryant ad right next to the grape picture, and the layout... well, judge for yourself: 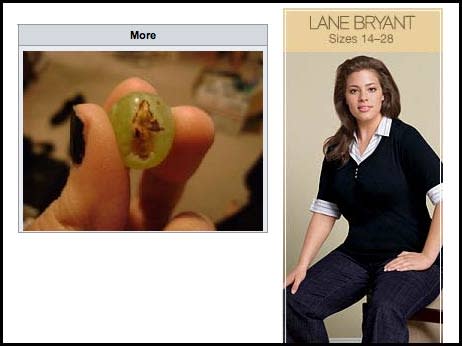 I'm not positive, but I doubt that's the sort of image Lane Bryant -- or the Church, for that matter -- wants to convey.