Very cool news: the flying infrared observatory, SOFIA (Stratospheric Observatory for Infrared Astronomy) -- which has been in the works for many years -- has seen first light. What's remarkable about this observatory is that it's mounted in a hole in the side of a 747! Don't believe me? Check. This. Out: 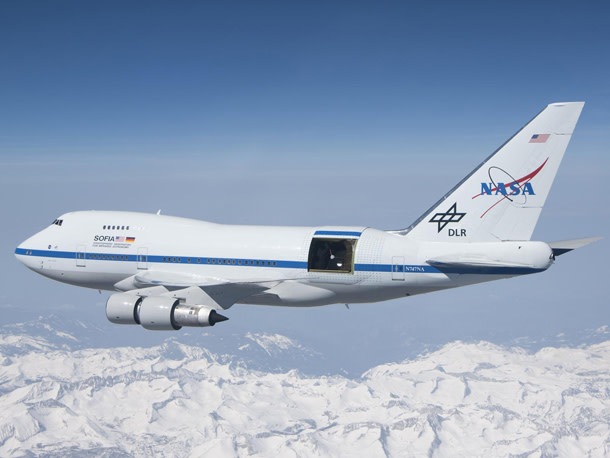 [Click any of the images here to embiggen.] See that ginormous square hole in the back of the plane? That's where the telescope sits, looking out at the sky. Why put it in a plane? Because SOFIA looks in the mid to far infrared, and observations like that are impossible from the ground. Water vapor in the air absorbs the kind of infrared light seen by SOFIA, but by the time you go up to about 10 km (35,000 feet) you're above 99% of the Earth's water vapor. That little bit left does still absorb the light, but a telescope at that altitude receives about 80% of the IR an orbiting observatory would. So, amazingly, they cut a big hole in the side of a modified 747 and stuck a telescope in it. A big one: SOFIA sports a 2.5 meter (8 foot) mirror, which is bigger than Hubble's! Here's a sample of what it saw: 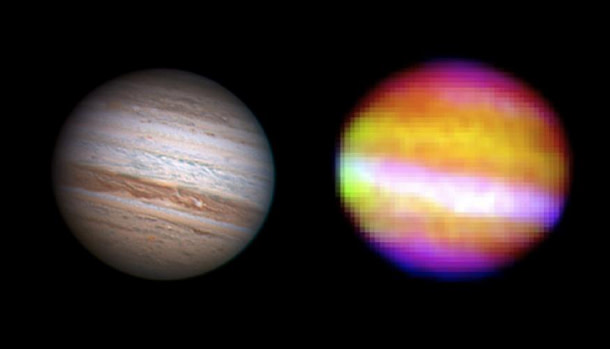 That is, of course, Jupiter. On the left is an image in visible light, and on the right the SOFIA image. It's a composite of three infrared colors: 5.4 (colored blue in the image), 24 (green), and 37 microns (red). Your eye can see wavelengths only as long as about 0.7 microns, so these represent wavelengths well outside what we can see. See the stripe on the left that's reddish? In the infrared it's brighter, because the gas in that belt is transparent to infrared light and we can see deeper into Jupiter's atmosphere where it's warmer. Note that the other belt is still missing, in the visible and infrared. Whatever is blocking the light from that belt is opaque to both our eyes and SOFIA's. 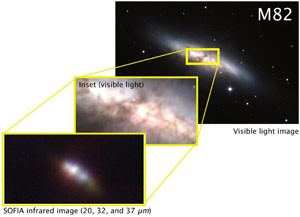 SOFIA also took a look at the nucleus of the nearby weird galaxy M82, which is undergoing a burst of star formation, and is lousy with thick dust that blocks visible light. SOFIA peers through that dust, revealing the star factories hard at work in the center of that galaxy. According to preliminary reports, SOFIA is performing perfectly, and getting great observations at a far, far cheaper price tag than putting something in orbit. We still need telescopes in orbit to do other work -- some IR is still absorbed even at that height -- but SOFIA will make terrific achievements. It also has a robust educational arm, which includes taking as many as 200 teachers per year up on observation flights! If you're an educator and interested in this, contact the team at SOFIA. You may just qualify to get the airplane ride of a lifetime. Image credits: Anthony Wesley, N. A. Sharp/NOAO/AURA/NSF, NASA/Jim Ross

The SciencesWatch Out: Objects in the Universe are Bigger than They Appear
Recommendations From Our Store