Get Out and Watch the Geminid Meteor Shower This Week 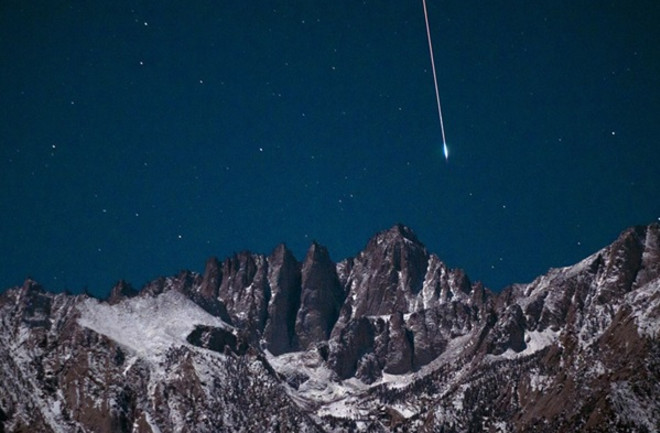 A brilliant Geminid meteor streaks through the sky over Mount Whitney in the Alabama Hills in the Sierra Nevada Mountains on December 14, 2011. With an elevation of 14,505 feet (4,421 meters), Mount WhitneyWith an elevation of 14,505 feet (4,421 meters), ranks as the highest point in the contiguous United States. (Credit: Tony Rowell) The spectacular Geminid meteor shower peaks the night of December 13/14. Although many people consider it to be a poor cousin to August’s Perseid shower, the Geminids often put on a better show. This year, observers can expect to see up to 120 “shooting stars” per hour — an average of nearly two per minute — under a dark sky. Viewing conditions could hardly be better for the Geminids this year. The waxing crescent moon sets around 10:30 p.m. local time, leaving the prime viewing hours after midnight free from any unwanted natural lighting. The best views will come between roughly midnight and 4 a.m., when the area from which the meteors appear to radiate passes nearly overhead. The only potential drawback is cloud cover, which, unfortunately, tends to be fairly common at this time of year. Rates for this shower remain decent for a few days, however, so target the night before or after the peak if the weather looks bad on December 13/14. Any stray light in the sky tends to drown out fainter meteors, so find an observing site far from city lights. A large field is ideal because you can then let your eyes roam across the whole sky. December nights tend to be cold, so bundle up in layers. Reclining in a lawn chair is a great way to take in a lot of the sky at once, but be sure to get up and walk around occasionally. It also helps to drink some hot coffee or tea. The Geminids begin as tiny specks of dust that hit Earth’s atmosphere at 22 miles per second, vaporizing from friction with the air and leaving behind the streaks of light we call meteors. The meteors radiate from the constellation Gemini the Twins (hence their name), near the bright stars Castor and Pollux. They can appear anywhere in the sky, however, and actually leave longer trails the farther from the radiant they are.

This article originally appeared on Astronomy.com. For more tips on what to look for in the night sky, check out their weekly guide: The sky this week]