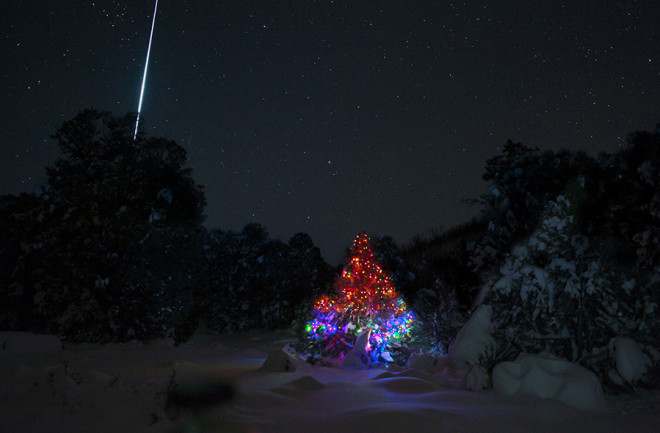 During the 2009 Geminid meteor shower, veteran astrophotographer Tony Rowell braved below freezing temperatures at elevations above 9,000 feet in the Eastern Sierra Nevada Mountains. To light this snow covered Christmas tree near Rock Creek Lake, he used his Celestron portable power pack with a 110 converter. His efforts were rewarded by this extremely bright fireball during a 20 second exposure. (Credit: Tony Rowell via Astronomy.com) Break out the blanket and the lawn chair. This year’s Geminid meteor shower will be a gem. When the shower peaks December 14, as many as 120 meteors an hour will be visible at sites free from city lights. And this year’s Geminid meteor shower is at its prime under dark skies just three days after New Moon. That leaves no moonlight to wash out the bright streaks from this prolific meteor shower. "No astronomy activity is easier or more social than meteor watching,” says Astronomy Senior Editor Michael E. Bakich. “You don't need any equipment except a chair. Just grab some friends, bundle up, and watch the show."

This annual sky show takes its name from the region where the streaks seem to originate — the constellation Gemini the Twins. This point is called the radiant. If you traced each meteor back, they’d converge at a point 3° northwest of the 1st-magnitude star Castor (Alpha Geminorum). This radiant point climbs nearly overhead at around 2 a.m. local time, which is when viewing is the best. But don’t stare right at the radiant. Instead, you’ll see longer streaks if you look about 40° to 60° away. To maximize your meteor count, you’ll have to head away from bright city lights and find a fairly dark observing spot.

One of this year's most prolific meteor showers could deliver up to 120 "shooting stars" per hour under ideal conditions. (Credit: Roen Kelly) The Geminids are known for their slow-moving streaks in comparison to other yearly showers. November’s Leonids soar into our atmosphere at some 159,000 mph (256,000 km/h), but the Geminids move at a relative crawl of just 78,000 mph (126,000 km/h). Most annual meteor showers happen as Earth passes through the dusty debris left behind by passing comets, but the Geminids are actually suspected debris from an asteroid — 3200 Phaethon. This space rock actually crosses uncomfortably close to our planet. Yet scientists still know little about it. It’s unclear whether Phaethon started life as a comet or an asteroid. Because the Geminids move so slowly, it’s one of the few meteor showers where incoming space rocks can actually survive the fall to Earth. So scientists at NASA’s Meteoroid Environment Office have taken to tracking this annual show to better understand where these meteors come from. If they can find a meteorite, it would be like a sample return mission to Phaethon. Fortunately, you don’t have to track every meteor you see from your lawn chair. All you have to do it look up and enjoy the show.