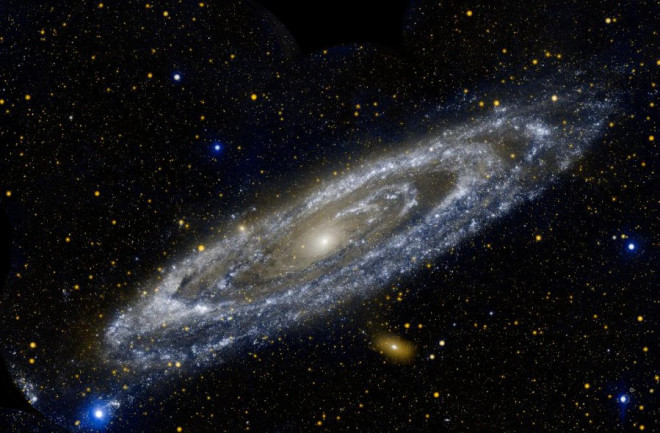 The Andromeda Galaxy turns out not to be unusual in the fact that its dwarf galaxies orbit within an orderly circular plain. Credit: NASA/JPL-Caltech Usually, the progress of science leads to greater complexity — alas, Earth isn’t the only world; no, electrons aren’t tiny little balls; unfortunately, germs aren’t all good or all bad . But once in a while, scientists discover the universe likes a little order, too: Astronomers have just found out the hordes of dwarf galaxies that orbit big ones tend to do so within a nice, well-defined disk. Now the only question is, why?

It’s a great big universe out there, filled with hundreds of billions of galaxies of different sizes. Most are relatively small dwarf galaxies, which tend to cluster around bigger and more massive galaxies. Computer models had long predicted that the little ones should orbit chaotically around the big ones, swarming like flies in random paths. Our own Milky Way Galaxy appeared to be a bit unusual, since it was clear most of our small companion galaxies orbited a little more neatly, in a flat, disk-like plane. Astronomers had just chalked that up to coincidence, but then last year a team of researchers announced that the dwarf galaxies around the nearby Andromeda Galaxy (M31) all orbited within a single large thin disk, too. Intrigued, some of those team members wanted to find out if the Milky Way and Andromeda galaxies were outliers, or if other large galaxies also kept their dwarfs in line. After analyzing the velocities of smaller companions in 380 galaxy systems from the Sloan Digital Sky Survey (a huge collection of galactic data), they had their answer: orderly disks seemed to be the norm. As their Nature paper puts it, “We have found that the average giant galaxy in the SDSS is consistent with our M31 template.” Orderly Mystery Again, this goes against expectations, so it’s not clear yet why smaller galaxies should prefer to orbit within well-defined disks. It could be that the current models and simulations aren’t powerful enough yet, and can’t account for all the subtle factors at play in a galaxy’s orbit. Or, it could mean there’s some essential knowledge gap in our understanding of the cosmos, from something unexpected influences in gas flow patterns to something as fundamental as misunderstanding gravity itself. Only time will tell what brings about this unexpected order.