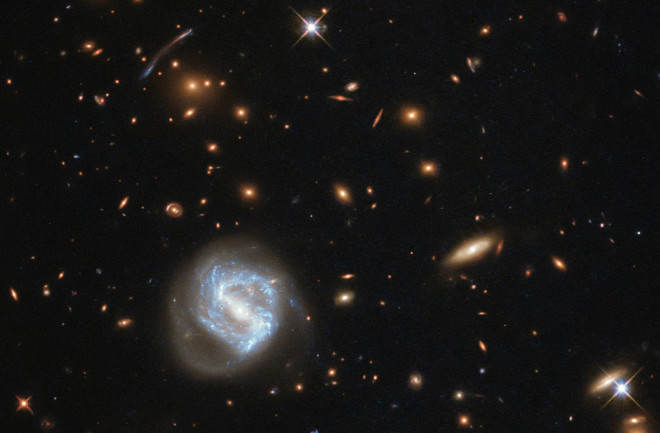 This image, taken by NASA's Hubble Space Telescope, shows galaxy cluster SDSS J0333+0651. (Credit: ESA/Hubble & NASA) Galaxy clusters house thousands of galaxies and endless streams of stars. Such a dense urban environment may sound like an ideal home for a galaxy, right? Not exactly. Astronomers know that once a galaxy is absorbed by a massive cluster, its star formation soon comes to a halt. And for years, researchers have tried to figure out why this phenomenon, known as “quenching,” occurs, but it continues to remain a mystery. To finally crack the case, a team of astronomers from the University of California, Riverside, studied these quenched galaxies across 70 percent of the universe’s history. Their results, published this week in The Astrophysical Journal, found that the hot gas within galaxy clusters is likely causing this stellar standstill.

New stars are born from thick molecular clouds, filled with cold dust and gas, that hang out within galaxies. Soon after a galaxy joins a galaxy cluster, though, this cold gas disappears and new stars cease to exist. To figure out how and why this happens, researchers have tossed a few ideas around over the years. They’ve theorized that energy from recent star formations, like supernovas and stellar winds, could start blowing the cold gas out of the galaxy as it enters the cluster. Because all the gas is flowing outward, star formation comes to a halt pretty quickly. Another theory, known as “strangulation,” could happen when galaxies use their cold gas to form stars, but end up quenching when they run out. On their own, galaxies replenish themselves with cold gas from the interstellar medium, but since galaxy clusters are instead filled with hot gas, they can’t restock their supply. Star formation fizzles out, but does so more slowly than the outflow method. A final theory suggests that, as a galaxy travels through a cluster, the hot gas in the intracluster medium slowly strips away the galaxy’s cold gas. This would quench a galaxy faster than the strangulation method, but slower than the outflow method.

A Trip Through Time

To find out which theory best holds up, the researchers set out to observe quenched galaxies throughout history. As part of their Spitzer Adaptation of the Red-sequence Cluster Survey (SpARCS), the team used the Keck Observatory’s Multi-Object Spectrograph for Infrared Exploration (MOSFIRE) instrument to measure the timescales of quenched galaxies. After observing the last nine billion years of the universe’s history, they uncovered an interesting trend — it takes longer for galaxies to quench as the universe gets older. They found that, within galaxy clusters, galaxies stopped forming stars after 1.1 billion years when the universe was four billion years old, 1.3 billion years when the universe was six billion years old and now, it takes upward of five billion years for a galaxy to quench. They applied the three different theories to their data, and found that quenching occurs too quickly for the strangulation method to work, and too slowly for the outflow method. The gas-stripping process, though, matched up with the quenching timescales observed in the early, middle and present universe. The results might not be solid proof, but they'll help researchers narrow down their theories as they prepare for follow-up investigations. By circling back with instruments like MOSFIRE, or the upcoming James Webb Space Telescope, they might be able to pin down the cause of galactic quenching once and for all.