Galaxies: Nation-States of the Universe

Galaxies are like the nation-states of the universe. They are the civilized domains where most of the visible matter resides in cohesive structures of spirals or spheres. 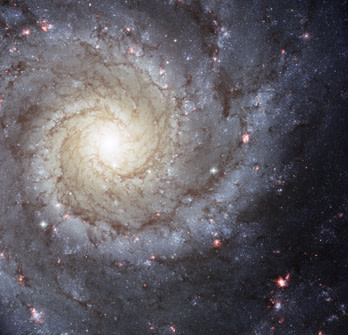 Galaxies are like the nation-states of the universe. They are the civilized domains where most of the visible matter resides in cohesive structures of spirals or spheres. Stretching between them are vast no-man's lands where light could travel millions of years before bouncing off anything of substance.

Although we see galaxies all around us, and live inside one called the Milky Way, we are still far from comprehending the details of how galaxies are built, why they look and act as they do, and what their ultimate fates will be.

New discoveries enabled by ever more powerful telescopes are shedding light on these mysteries, and even raising a few more questions. Scientists hope that soon we will fully understand the nature of the Milky Way and its most distant relatives. 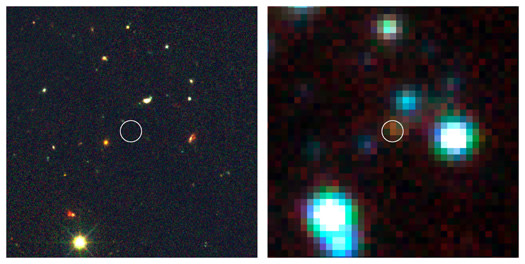 The only way to study how young galaxies develop is to look back in time--that is, to look as far away as we can see, because the light from those distant galaxies will have taken billions of years to travel to us, and thus offers a snapshot of the early universe.

In December, 2007, astronomers published these two photos--the left in visible light and the right in infrared--which offer a glimpse of a galaxy called GOODS 850-5, 12 billion years ago. At this point, only 1.5 billion years after the big bang, the galaxy was forming stars at a furious pace, about 4,000 a year. Astronomers were surprised to find such a high rate of star formation in a galaxy so young; it means that galaxies might have developed much faster than previously thought.

GOODS 850-5, in the white circle, is visible only in the infrared photo because its visible light is obscured by dust in the galaxy. The hot young stars heat up the dust, which then emits the infrared radiation that we see. 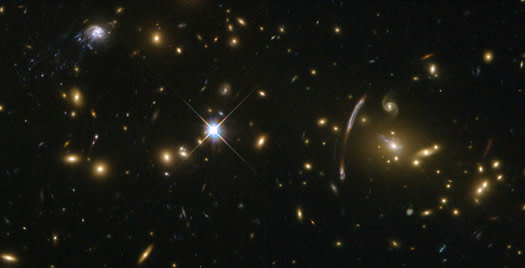 This Hubble image from March 2007 shows a cluster of galaxies whose combined gravitational field is so powerful it is ripping apart a galaxy (top left in purple) that is flying through it. The hapless spiral galaxy's odd shape shows that gas and stars are trailing from it as it plows through the cluster, called Abell 2667.

Scientists now think many galaxies start out as gas-rich and then become gas-poor over time, perhaps due to encounters like this one. 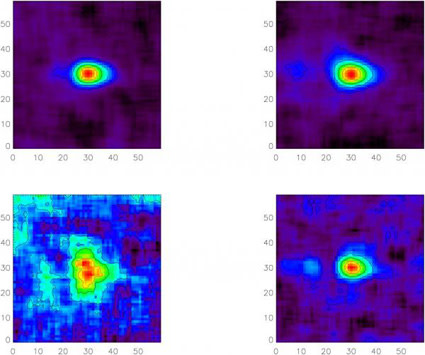 Astronomers wish they could watch galaxies in the process of being born, but since this happened so slowly and so long ago, they must extrapolate from galaxies in their current states to try to piece together their histories. This quest recently benefited from a new piece of the puzzle: a November, 2007 observation of faint protogalaxies from back when the universe was only 15 percent of its current age.

The images are the most sensitive example of a type of imaging called spectroscopy, where light is dispersed into its component colors and the relative amounts of each color are measured. In these spectra, the scientists found the distinct signature of protogalaxies, which they believe are the building blocks of full-grown galaxies.

This discovery backs up the theory that gas coalesces into blobs (protogalaxies) that then stick together and eventually become galaxies. 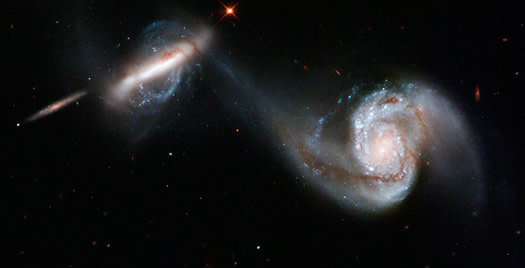 These two galaxies are being drawn toward each other by their mutual gravitational pull. As they interact, stars, gas, and dust are dragged out and the galaxies' shapes become warped.

Surprisingly, when two galaxies collide, the stars within them rarely hit each other, because there is so much empty space between each star. But the tumult and chaos of the collision gives many merging galaxies some of the highest rates of new star formation.

In October, 2007, the Hubble Space Telescope took this image of a pair of galaxies collectively called Arp 87, approximately 300 million light-years away.