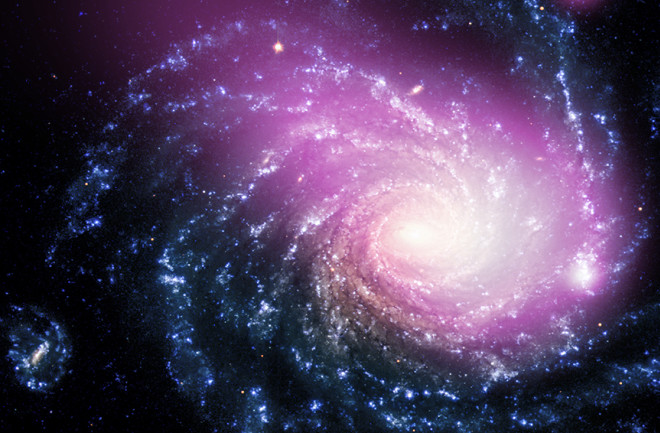 Dwarf gets eaten by a spiral galaxy far, far away. X-ray image credit: NASA/CXC/Huntingdon Inst. for X-ray Astronomy/G.Garmire, Optical image credit: ESO/VLT The enormous swirl in this image is a spiral galaxy that goes by the name of NGC 1232. It appears to be spinning along, minding its own business. But X-ray images allowed astronomer Gordon Garmire to see a strange glow spread across its middle---the purple in the photo above. He knew, then, that something fishy was going on. Now, in a recently published paper, Garmire proposes that the purple haze is a superheated gas cloud that formed when the spiral galaxy collided with---and consumed---a dwarf galaxy (no longer visible because it's been eaten by Mr. 1232). If researchers prove that this fireworks display is actually the messy aftermath of a galactic collision, it could shed light on the evolution of galaxies.

Astronomers are still working out exactly what went down, because this is the first time the aftermath of such a wreck has ever been seen. Garmire suggests that the collision created a shock wave that generated superheated gas with a temperature of 6 million degrees. In addition to the gas, the shock wave may have triggered the formation of massive stars, clustered in a bright spot on the far right side of the image. Even though the galaxy mash-up is 60 million light years away, NASA's Chandra telescope was able to capture the X-ray glow of the gas cloud; in the image above that is overlain on a view of the scene in visible light (which appears blue and white). The images were taken in 2008 and 2010, and the analysis was published on arXiv.org this month.

Because the composite image only shows two dimensions, researchers aren't sure if the cloud is flat or spherical. Depending on its form, the cloud's mass could be anywhere from 40,000 to 1,000,000 times that of our sun.

Although astronomers don't know when this never-before-seen galactic collision began, the aftermath is expected to last another 50 million years. And if the spiral galaxy did indeed eat its unidentified dwarf neighbor, the researchers say they may be able to analyze the afterglow from this collision and others in the future to figure out how galaxies grow.