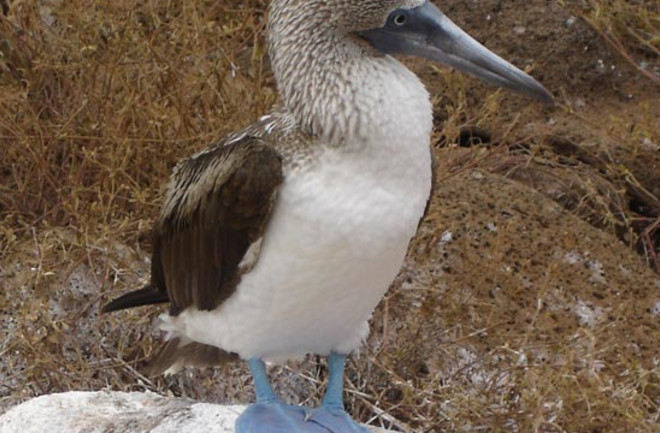 Middle of the world to everyone! And I do mean that literally. I am mere kilometers from the Equator, aboard the Celebrity Xpedition cruise ship, touring the Galapagos islands. Mrs. BA, The Little Astronomer, and I are here as part of the James Randi Educational Foundation's "Amazing Adventure", a chance for nearly 100 critical thinkers, skeptics, and other reality-based folks to get together and see the world. We arrived in Quito, Ecuador on Friday, and spent the next day seeing the city and taking a look around the area. We saw some elaborate churches, visited the incredible countryside (average elevation = 3000 meters), ate lunch near a volcanic crater, and generally had a fantastic time. The next day we flew to the Galapagos! As I write this, we're on our third day, and I hardly know how to talk about everything that's happened. We've seen fantastic wildlife -- sea lions, tortoises, boobies (like the one pictured above; I got that picture the first day), frigates, albatrosses, iguanas, incredibly brightly colored crabs, and last night we saw several sharks circling the boat, attracted by our lights. We also saw a sea lion chase down and eat a trumpet fish, which was awesome. And the skies! The other night, I saw Alpha Centauri for the first time. That was moving beyond words. It was far brighter than I expected, and obvious even to a northern-biased star gazer like myself. Just below it is Hadar, or Beta Centauri, and below that is the Southern Cross. The Cross is not quite as amazing as made out in legend due to its compact size (you can easily block it with your outstretched hand) but it's cool to see so many bright stars so tightly configured. Also, it helps to know that the three brighter stars in the cross are all massive, and will one day blow up in titanic supernova explosions. That seriously increases the coolness factor. I'm hoping to get up early one morning over the next few days to see the Magellanic Clouds, two companion galaxies to the Milky Way. I saw them in Australia back in 2003, and I would dearly love to see them again. The landscape is equally fantastic. The archipelago is volcanos, similar to the Hawaiian Islands or the Canaries in the Atlantic. There are hills made from extinct volcanos everywhere; some made of tuff (compressed ash), others of cinders, and a third kind called a splatter cone, where lava sputters out of the vent and forms extremely rough but apparently fragile structures (they are the most eroded). The ecosystem has built up over the past few million years, and is now a very intricate and delicate model of evolution. Speaking of which, I am very pleased to see how seriously the cruise line and the Ecuadoran government has taken the Galapagos as a national park of incredible importance. The impact of the tour is minimal, with well-marked paths we must take, and very well-transmitted instructions on what we can and cannot do. Not too surprisingly, the skeptics on the cruise also take these instructions seriously, and I have been pleased and proud to see how everyone has done when on the islands. As a group, skeptics know how delicate the world really is, and we want to see it in all its fantastic detail and complexity. Best of all, a portion of the money raised from the tour by Celebrity Cruises goes toward the island-- educating the tourists, of course, but also maintaining the system, hiring naturalists, and funding more scientific investigation so we can understand this phenomenal place even better. As a skeptic, I hesitate to use some words when describing such things, but it's hard to avoid the use of the word "magical". Of course it isn't really magical: it's the natural world at work, with millions of years of time and many of the more vicious red-in-tooth-and-claw aspects invisible to us. But "magic" seems appropriate (especially with Randi on board). The water, the rugged land, the beautiful and awe-inspiring wildlife... this is a special place, and I'm glad that we are not only learning about it ourselves, but helping others to understand it better.