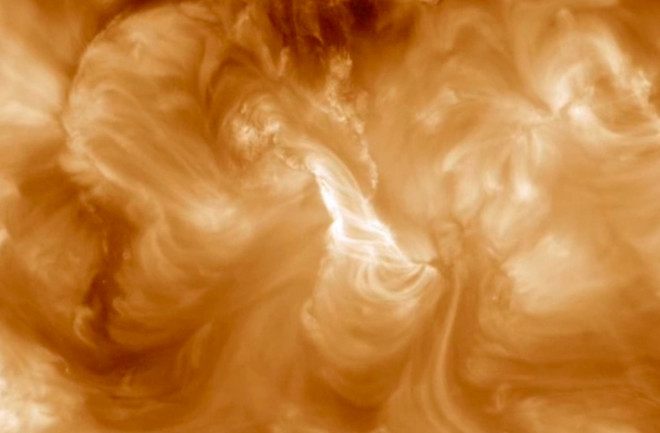 A screenshot from a movie of the sun's surface, as seen in the ultraviolet portion of the spectrum by NASA's Solar Dynamics Observatory spacecraft. Please click on the image to see the animation. (Credit: NASA/SDO) Earlier this week, the Sun blasted billions of tons of hot particles from its surface toward Earth at a speed of about 560 miles per second. But not to worry: The Space Weather Prediction Center forecasts only minor effects such as weak fluctuations on power grids as material from this coronal mass ejection hits our planet's protective magnetic field. And there's one perk for residents of the northern tier of states in the U.S., including Northern Michigan and Maine: They may get to see the aurora borealis tonight and tomorrow. There's also another perk for all of us: NASA's Solar Dynamics Observatory caught the aftermath of the event on the sun's surface. To see what happened, click on the image at the top of the page for a dramatic animation. The movie shows a closeup of the sun's surface, seen in extreme ultraviolet light. It covers a period of 12 hours on July 16. Watch for a burst of activity toward the center followed by a dramatic brightening of coronal material that coils in tight loops along lines of magnetic force. Then watch for another burst of activity toward the lower end of the loops. The sun is at the peak of its 11-year activity cycle, known as "solar maximum." But the activity is actually the weakest in 100 years.