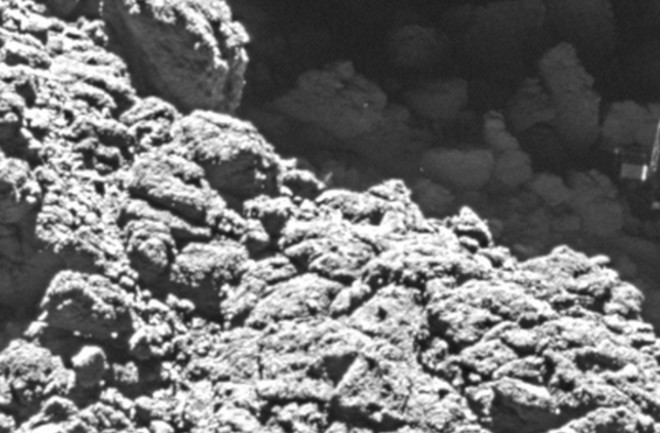 (Credit: ESA) After not knowing the exact location of the Philae lander for almost two years, the cameras on the European Space Agency’s Rosetta orbiter picked up images on Friday of Philae tucked into a crack on Comet 67-P/Churyumov-Gerasimenko. Philae was attached to Rosetta during its 10-year journey through space to catch up to the comet and was released to touch down in November 2014, making it the first spacecraft to land on a comet. It sent data to Earth for three days before its battery died, causing Philae to go into hibernation. When the comet came closer to the sun, though, it helped charge it enough to communicate with Rosetta briefly in 2015. Thanks to radio signals between Rosetta and Philae, the general area of where Philae landed was known, but it had bounced after its initial touchdown and the exact location couldn’t be found until now. Rosetta was 1.7 miles from the comet’s surface when it captured the images that show Philae’s body and two of its three legs. Rosetta will join Philae on the surface of Comet 67P, as it is scheduled to crash into the comet on September 30 to investigate the comet from close up and complete its mission. The data recovered from Philae has already immensely helped scientists to understand the nature of comets and the role they play in universe.