Found: One of Neptune's Asteroid Stalkers 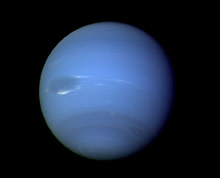 Astronomers have confirmed it: Neptune has a stalker. They have spotted, for the first time, an asteroid follower that keeps a fairly constant distance behind the planet in its orbit around the sun. And there may be many more. Asteroid 2008 LC18 can't help itself. It's caught in a balancing game between the gravitational tug of the sun and Neptune, and effects from its whirling course. The conflicting tugs cause the asteroid not to orbit Neptune or crash into it, but instead to follow the planet from a little distance behind (about 60 degrees on its path). Neptune has five of the these pits--called Lagrangian points (see diagram below the fold)--but the spots ahead and behind the planet, researchers say, are best for asteroid-trapping, since the hold is particularly stable in these places. Researchers have previously spotted several asteroids in front of the planet (again by about 60 degrees), but this is the first time they've found one following it. The findings appeared online yesterday in Science. 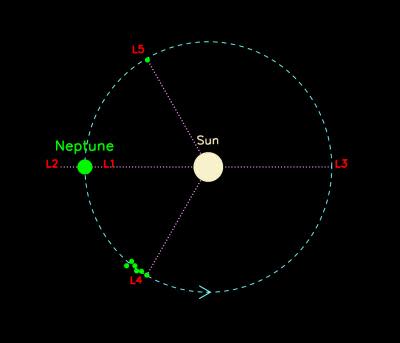 Spotting followers in the place behind the planet was particularly difficult because astronomers' line of sight to where these special Lagrangian asteroids--called Trojans--roam overlapped with the center of the Milky Way. Says lead author Scott Sheppard in a Carnegie Institute press release:

"The L4 and L5 Neptune Trojan stability regions lie about 60 degrees ahead of and behind the planet, respectively. Unlike the other three Lagrangian points, these two areas are particularly stable, so dust and other objects tend to collect there. We found 3 of the 6 known Neptune Trojans in the L4 region in the last several years, but L5 is very difficult to observe because the line-of-sight of the region is near the bright center of our galaxy." [Carnegie Institution]

Using the 8.2-meter Japanese Subaru telescope in Hawaii, astronomers spotted the L5 Trojan by waiting for dust clouds in our galaxy to block out the light from the galaxy's center. They determined its orbit using Carnegie's 6.5-meter Magellan telescopes in Chile, and they believe finding 2008 LC18 means the planet may have many Trojan asteroids. Sheppard believes they'd be easier to spot if Neptune wasn't so far away.

"We believe Neptune Trojans outnumber the Jupiter Trojans and the main-belt asteroids between Mars and Jupiter," Scott Sheppard of the Carnegie Institution in Washington, D.C., told Space.com. "If Neptune was where the main-belt was, we'd know thousands of these objects." [Space.com]

Sheppard also notes that Neptune's newfound Trojan has a slightly tilted orbit, which may mean that the planet captured the asteroid when it was in a different location and trajectory--lending support to the theory that the giant planets don't have the same orbits that they started with in the early solar system.