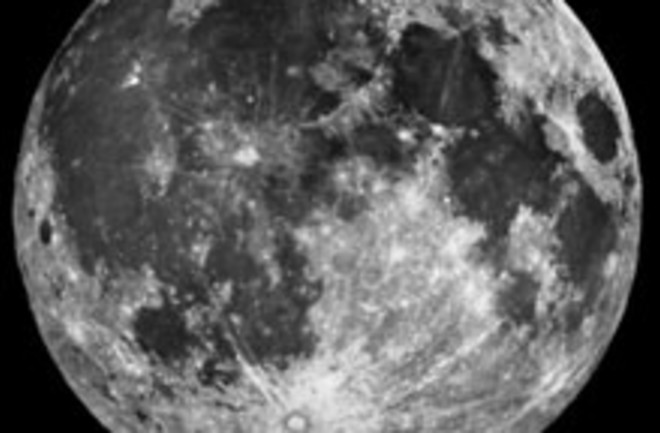 Over the last year, scientists have discovered that the moon isn't a bone-dry place, as we previously imagined. Water ice has been spotted not just at the lunar south pole but also the north pole, and scientists have noted that the north pole deposits contain enough water ice to sustain a human lunar base. Now, scientists studying hundreds of pounds of moon rocks brought back by Apollo astronauts have found that samples containing the mineral apatite have minute traces of water. The new analyses of the samples, revealed last week at the Lunar and Planetary Science Conference in Houston, Texas, show that the evidence of the moon's water was right under scientists' noses for almost 40 years--they just didn't have sensitive enough instruments to detect it. The water levels detected in Apollo moon rocks and volcanic glasses are in the thousands of parts per million, at most—which explains why analyses of the samples in the late 1960s and early 1970s concluded that the moon was absolutely arid

[New Scientist], scientists found water in minuscule quantities in the apatite--up to 6,000 parts per million. The apatite examined by one team was taken from one of the moon's mares--the dark regions that are believed to have been formed by ancient magma oceans. This is the first time that water has been found in lunar magmatic material.

One of the research teams also found that the ratio of hydrogen isotopes in the apatite's water differed greatly from the isotope mix found in earthly water, leading scientists to question where the water on the moon came from. Researcher James Greenwood believes

comets may have crashed into the infant moon before its magma ocean crystallised, supplying the water. Or it may have come from a Mars-sized planet, dubbed Theia, that slammed into Earth 4.5 billion years ago to make the moon

is that when that collission happened,

not quite all the water was driven off when chunks of Earth were flung spaceward to form the moon—in other words, the water may be from an ancient version Earth [National Geographic].

Related Content: 80beats: Tons of Water Ice at the Moon’s North Pole Could Sustain a Lunar Base