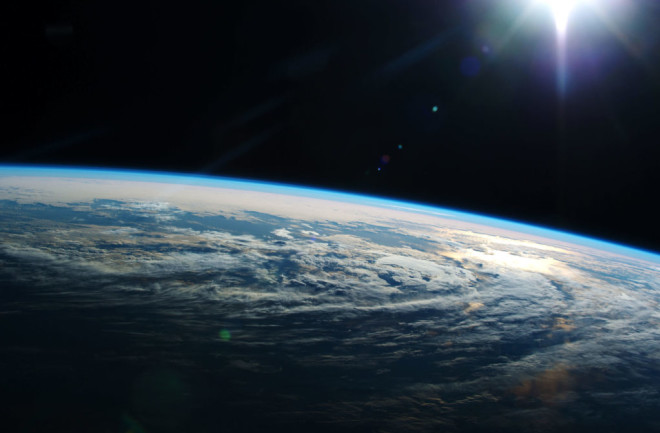 Jeff Williams/NASA You may have heard me say this before, but I firmly believe there are few topics more fundamental to study than the workings of our planet. The earth sciences aim to unravel how the lithosphere, atmosphere, hydrosphere, and biosphere operate---and how they operate together. It is a science of synthesis. And it's one that needs to move forward, both because of the great service the earth sciences perform for society and the understanding of world-shaping processes that they advance. Now, earth scientists are not always the first researchers you see on TV or in articles about science, even if the topic is plainly within their realm. Since the days of Carl Sagan, the physicists have carved out a nice role as the most prominent popular science communicators. There isn’t anything wrong with that. But earth scientists are experts on the Earth---and when questions arise about climate, hazards, and resources, it makes sense to reach out to the researchers who have the most knowledge and expertise in those earthy topics. Even though physicists have the strongest voice in science communication, there are many more outlets for earth scientists to spread their knowledge. The free flow of communication from scientist-to-scientist and scientist-to-public is the key to making sure the country continues to value science: funding research across all sciences, appreciating and acting on the results, and continuing to give scientists the freedom to accumulate and interpret data to draw evidence-based conclusions. This isn’t some vast conspiracy of scientists trying to get rich, but rather people dedicated to knowing how the planet operates. If you’re excited about learning about earth science, a great way to start is to follow earth scientists and earth science organizations on Twitter. Many of us strongly value communicating with the public, mostly because we’re just that excited about what the science is doing and discovering. So I’ve created a list of people and organizations to follow to get you started in earth science. Scientists are people, so expect a lot of science but also a lot of other things that make them tick (or make them angry, or thrilled). This, by no means, is an all-inclusive list. Rather, it's a cherry-picked list of my favorites. If you have other earth scientists who you think need a follow, leave them in the comments and I can amend the post over time—especially with international and non-English language geoTweeters. Give me a reason to add them so I can add details for people looking for science on Twitter. Enjoy!

Scientists (in no particular order, with apologizes to all I couldn't include)

@drlucyjones: Dr. Lucy Jones is an earthquake expert who recently retired after years of service with the U.S. Geological Survey. She quells a lot of the crazy ideas and "predictions" people have about earthquakes, especially in California.

When I do science, I work with scientists of all ages, colors, genders and nationality. When we are inclusive, we do better. #USofScience

@allochthonous and @highlyanne: This duo write Highly Allochthonous and run all-geo.org. Both faculty at Kent State University, Anne Jefferson studies water, especially in urban environments while Chris Rowan works on paleomagnetism and tectonics. Both are strong advocates for science, science communication and diversity/inclusivity in the sciences.

Great paper that I refer back to time & time again. http://t.co/5Y4xZmHqPv

@Tessa_M_Hill: Tessa Hill is a professor at UC Davis and an expert on climate and oceans. She is also (along with the aforementioned Anne Jefferson) an AAAS Public Engagement Fellow.

@seis_matters: Christopher Jackson studies basin analysis (in other words, how sediment and tectonics creates and fills valleys and depressions on Earth) at Imperial College. He's also about to head off on a lecture tour for the Geological Society of America.

@lava_ice: Ben Edwards is a volcanologist at Dickinson College working on volcanoes in far-flung places like Iceland and Chile. He also likes to dabble in making his own volcanoes with the help of the folks at Syracuse University.

@methanoJen: Jen Glass is faculty Georgia Tech and studies geobiochemistry and how microbes impact methane production. She's a prolific tweeter and activist as well, trying to protect the freedom of speech for scientists and making science as open and accepting as possible.

@janinekrippner and @alisongraeting: Together, Janine Krippner and Alison Graetinger keep track of all the volcanic events that even I have troubling keeping up with. Beyond that, they run In the Company of Volcanoes

Can't educate about climate science without the data! Thank you @ClimateCentral - looking forward to your next 100 days #climate100http://t.co/yOC0O4wko8

n and getting students involved in research to get them excited about earth sciences.

Who knew you could go hiking on a volcano in the East Bay? (A very old and folded one...) pic.twitter.com/lR74Jh69aR

@davidmpyle: David Pyle is a distinguished professor at Oxford University, an author of several books on volcanoes and an important drive of Oxford Sparks and STREVA (strengthening resilience to natural hazards in volcanic areas).

. If you need even more (and you do), Ron Schott (@rschott) keeps an exhaustive list of geologists on Twitter

New: Italy’s Etna has its first eruption of 2017, Erta’Ale has first lava flows in decade and Alaska keeps busy: http://t.co/74Dd2mnVgY

And there is also yours truly: @eruptionsblog

(Note: Some of these accounts are US government agencies, so I can’t guarantee they’ll remain the great sources of science information moving forward.)

All #volcanoes in the #Cascade Range of Washington and Oregon are at normal background levels of activity this week. http://t.co/B13e6mk1wrpic.twitter.com/pgbT52b81n

@USGS and @USGSVolcanoes: The U.S. Geological Survey has a ton of useful Twitter accounts to shell out lots of great information. You can start with the main survey account and I, of course, recommend the Volcanoes account to keep track of all the rumblings of the volcanoes monitored by the USGS. If earthquakes interest you, try @USGSBigQuakes.

"These results support the recommendations of the Paris Agreement..." Via #AGUblogs from #AGUpubs@AGU_Eoshttp://t.co/i6YczM8QWl

@theAGU and @AGU_Eos: These two are the main account for the American Geophysical Union and the Union's magazine, Eos. You'll find tweets on new earth science research, posts from the great AGU blog network and statements of policy from AGU (@AGUSciPolicy), including their letter denouncing restrictions on how scientists can communicate. If you're into volcanoes, you can also try the @AGUvgp account for the Volcanology, Geochemistry and Petrology group.

@GlacierHub: The account for Glacier Hub, a nexus of information about glaciers and the impact that changing climate has on glaciers along with the communities impacts by glaciers.

@trowelblazers: This account sends out links and information about the multitude of women who had played important roles in the history of archaeology, palaeontology & geology along with what women are doing across these fields today.

@geosociety: The Geological Society of America, bringing you new earth science research and links to fascinating articles on our planet from across the internet.

How did our planet get its #water? Find out over on this great post on for #EGUBlogs: http://t.co/AEYlSyJLkE#AGUBlogspic.twitter.com/JJnQ7QCrVK

@EuroGeosciences and @EGU_GMPV: The European Geosciences Union, the European twin of AGU along with their section of Geochemistry, Mineralogy, Petrology, Volcanology.

@STREVAProject: I mentioned the STREVA (strengthening resilience to natural hazards in volcanic areas) Project above, but it deserves it's own listing. The Project looks to help areas in danger from volcanic activity through outreach and research. You should also check out my post on the various volcano observatories you can follow on Twitter

. Journalists (again, just some of my favorite science journalists, but there are many, many more out there!)

Eek, a close call in space tomorrow. #Spacedebris threatens 1 of the SWARM magnetic-field satellites. Controllers may boost its orbit. http://t.co/hneqoamoEH

@alexwitze: Alexandra Witze writes for Nature and is the co-author of Island on Fire about the eruption of Laki in Iceland.

@mikamckinnon: Mika McKinnon is a trained geophysicist and a freelance science writer (along with sci-fi science consultant)

Last time the Earth was this warm, sea level was a whole lot higher http://t.co/1Hyyb0YIRq

@teideano: David Calvo is a member of INVOLCAN (@involcan), a volcano monitoring group in the Canary Islands and a radio/TV personality covering science.

Sinkhole is where Temescal Creek, long culverted, used to run 100 years ago. Another creek, the former Kohler Creek, was assigned its name. http://t.co/12ve3yOaVs

@aboutgeology: Andrew Alden has been writing about geology on the internet longer than most people and has wrote some fascinating stuff about the geology of the Bay Area (amongst many other topics).

Died #OTD in 1873, Victorian geologist Adam Sedgwick who teached a young Darwin the skills of a field geologist http://t.co/vL7eNSuxHB

@david_bressan: David Bressan writes about geology for Forbes, tackling the long and winding history of the discipline.

Crazy times in the #Arctic -- "What has happened over the last year goes beyond even the extreme." http://t.co/DMrjh9o63f

@earthmagazine: As the title implies, Earth magazine digs deep into the planet to cover all the news and research in geosciences. Looking at Earth (I'm a big fan of satellite views of Earth, and you should be too!)

Despite the winter storms, there is still a long way to go before California makes up its snow-water deficit. http://t.co/cyWFGk5zzJ#CAwxpic.twitter.com/xIfHSoy2YH

@NASAEarth: The NASA Earth Observatory has thousands of amazing images of the planet and keeps them coming on our ever-changing world. They also help us visualize the vast amount of data that can be collected by earth-observing satellites.

@NASA_Landsat: This account follows all the great work done by the NASA/USGS Landsat missions that watch the planet.

@Landsatbot: This automated account is great if you like random satellite views of the planet from Landsat 8. Sometimes they are an area of geologic wonder, sometimes they are "unnamed location" in the middle of the ocean or arctic.

@Planetlabs: Their armada of Doves are some of the newest earth observing satellites.