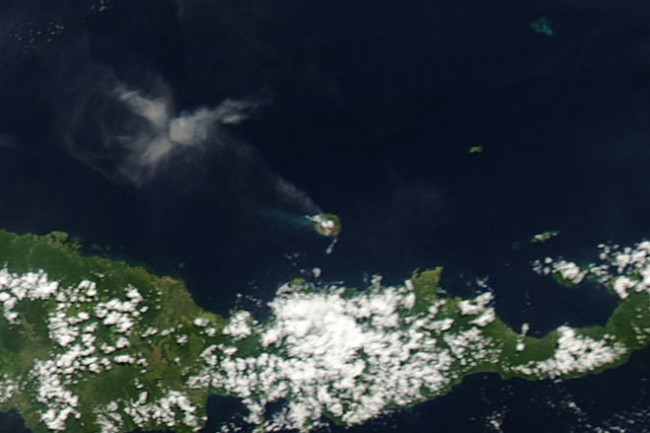 Aqua/MODIS image of a small ash plume from Paluweh in Indonesia, taken on April 29, 2013. Image: NASA One of the best things about all the satellites that snap pictures of the multitude of volcanoes on the planet is their ability to capture ephemeral moments that are lost without these observations. Just today, I saw two sets of images that show brief snapshots in the history of a volcano that would likely never appear (or be easily obscured) in the geologic record. The first is from Paluweh in Indonesia. I've already discussed the current activity at the volcano is dominated by small collapses of the lava domes that are being extruded in the crater. These collapses form small explosions as pressure is released on the subsurface magma coming up in the crater. However, once the pressure is equilibrated, the explosion ends. These events can be brief, leaving little to no trace even if they generate a small pyroclastic flow. Today's Aqua/MODIS image from Paluweh shows an ash plume extending from the volcano to the northwest (above) -- near the volcano, the plume is thin, but further from it, over the ocean, the plume is a denser, larger cloud. This may be the ephemeral signature of a dome collapse, that brief "puff" of an explosion caused by a partial collapse of some of the crater lava dome. Without this snap, this event would like have not been noticed, but with it, we can see the results of these small explosions, likely only minutes to hours after it occured. Second is a pair of images from Mawson Peak on Heard Island in the Indian Ocean. We've seen some suggestions that an active lava lake might be hiding under the clouds at Heard Island, but direct evidence has been tricky to find because of the volcano's remote location and less-than-optimal seeing conditions over the island. Well, two snaps taken on April 7 and April 20, posted today on the NASA Earth Observatory, show a small (and I mean small) lava flow extending from the summit down the southwest slope of the volcano (below). In a IR image of the summit taken on April 7, it is clear that the area is hot. Now, these images are great because they show clearly the hot, basaltic lava in contrast to the white snows of the slopes of Mawson Peak. However, they do leave me a little perplexed as there doesn't seem to be much evidence of an obvious vent at the summit -- much of the summit is covered in snow, which is surprising if there is either an crusted-over lava lake or an active fissure. Yet again, we have an example of an ephemeral event that, after the lava flow cools and is covered in snow, the timing of this lava flow would be lost. Thanks to these satellite images, we have a good idea of when this eruption occurred. UPDATE: Here is another (partially clouded) image of Mawson Peak from March 27 that shows the lava flow as well. 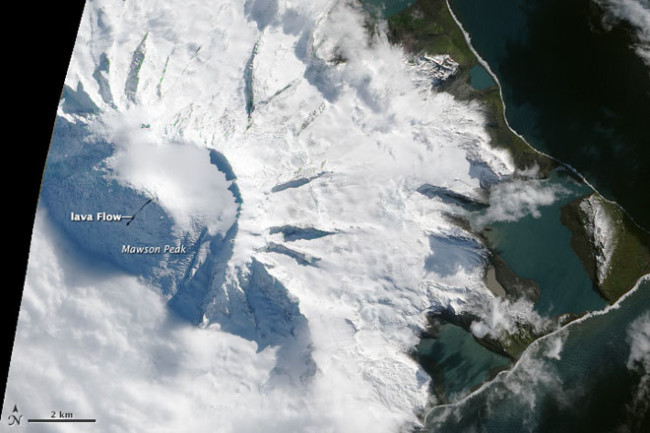 A small lava flow from the summit of Mawson Peak on Heard Island, capture by EO-1 on April 7, 2013. Image: NASA Earth Observatory. Remote sensing is already an invaluable piece of the volcano monitoring quiver. These shots show just how they can capture fleeting moments of a volcano's history. {Special thanks to Rob Simmon (NASA EO) for these images.}