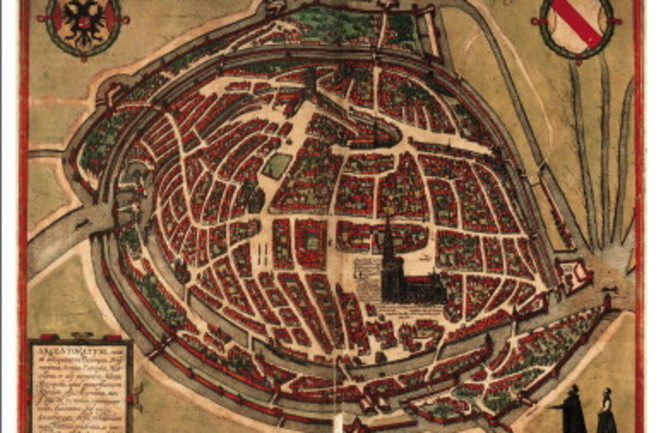 Figure 1: Half bird's-eye view of Strasbourg by Franz Hogenberg, contained in Georg Braun and Hogenberg's Civitates Orbis Terrarum published in 1572.

In their free time, some scientists and doctors like to try to figure out causes of medically-related historical events. For example, the authors of this study investigate what may have caused the crazy dancing “epidemic” of 1518 in Strasbourg: “Some time in mid-July 1518 a lone woman stepped into one of its narrow streets and began a dancing vigil that was to last four or even 6 days in succession. Within a week another 34 had joined the dance. And by the end of August, one chronicler asserts, 400 people had experienced the madness, dancing wildly, uncontrollably around the city.” And this wasn’t a sedate affair; the dancers’ feet often ended up bruised and bloody. The authors were not able assign a biological cause to the epidemic (it seems unlikely that hallucinogenic compounds from the rye fungus ergot were involved), but they suggest that hunger and psychological stress were the likely culprit, with a healthy dose of religious belief thrown in: “In times of acute hardship, with physical and mental distress leaving people more than usually suggestible, a fear of St Vitus could rapidly take hold. All it then took was for one or a few emotionally frail people, believing themselves to have been cursed by St.Vitus, to slip into a trance. Then they would unconsciously act out the part of those who had incurred his wrath: dancing wildly, uncontrollably for days on end.” The description of the events, and the government’s (likely unhelpful) response, is fascinating. We have included our favorite bits from the full text below. Enjoy!

In a spin: the mysterious dancing epidemic of 1518. “In 1518, one of the strangest epidemics in recorded history struck the city of Strasbourg. Hundreds of people were seized by an irresistible urge to dance, hop and leap into the air. In houses, halls and public spaces, as fear paralyzed the city and the members of the elite despaired, the dancing continued with mindless intensity. Seldom pausing to eat, drink or rest, many of them danced for days or even weeks. And before long, the chronicles agree, dozens were dying from exhaustion. What was it that could have impelled as many as 400 people to dance, in some cases to death?” Bonus quotes from the full text: “As the dance turned epidemic, troubled nobles and burghers consulted local physicians. Having excluded astrological and supernatural causes, the members of the medical fraternity declared it to be a ‘natural disease’ caused by ‘hot blood’ 2, 4 and 5. This was orthodox physic, consistent with Galen’s view that bloody fluxes could overheat the brain, causing anger, rashness and madness. But the response of the authorities was neither to bleed nor to provide cooling diets. Instead they prescribed ‘more dancing’. To this end they cleared two guildhalls and the outdoor grain market and they even had a wooden stage constructed opposite the horse fair. To these locations the dancers were taken so they could dance freely and uninterrupted. The victims would only recover their minds, said the authorities, if they persisted both day and night with their frantic movements. And to facilitate this supposed cure, the authorities next paid for musicians and professional dancers to keep the afflicted moving. Every time the sick flagged, fainted, stumbled or slowed, the musicians raised the tempo of their playing and hired dancers held them firm and quickened their pace (Figure 2). ‘They danced day and night with those poor people’, one eye-witness recalled 1, 2 and 4. In grain market and horse fair, the elites had created spectacles every bit as grotesque as a Hieronymous Bosch canvas portraying human folly or the torments of Hell. Only after those with weak hearts or prone to strokes began to die did the governors rethink their strategy. Deciding that the dance had nothing to do with putrefying blood cooking normally moist and cool brains, they now saw it as a curse sent down by an angry saint. Hence, a period of organised contrition was instituted: gambling, gaming and prostitution were banned and the dissolute driven beyond the city gates. Soon after the dancers were despatched to a mountaintop shrine in the Vosges mountains to pray for divine intercession. There they were led around an altar, wearing red shoes provided for the ceremony, upon which stood a bas-relief carving of St. Vitus, the Virgin and Pope Marcellus. In the following weeks the epidemic abated. Most of the dancers, we are told, regained bodily control…” Related content: NCBI ROFL: Floor vibration response to Irish dancing. NCBI ROFL: People prefer dance clubs that smell like peppermint. NCBI ROFL: Clinical diagnosis: patient was 2 legit 2 quit.