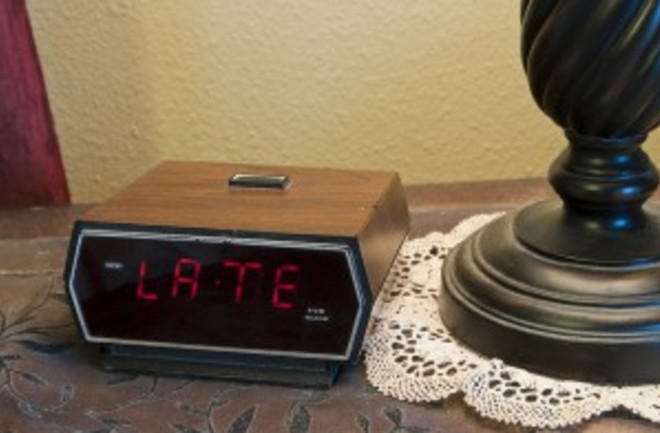 Photo: flickr/EvanIf you know any scientists, you'll know they are often pretty bad about procrastination. How bad? Well, according to this author, a program director at the NSF, grant submissions right before a deadline are predictable enough to be defined by a mathematical function (we wonder what dreaded task he was putting off by graphing this). It turns out that the rapid increase in submissions in the days leading up to the deadline actually follow a modified hyperbolic function (see figure below). He predicts that similar events with deadlines, like submitting tax returns and term papers, are likely to follow the same trend. He ends with a note of caution: "Bear in mind, though, that hyperbolic functions diverge to infinity at the asymptote. To procrastinating submitters, the most critical issue is that by waiting until the deadline or close to it, they eliminate the time needed for identifying and correcting errors that could make their proposal ineligible for consideration." You've been warned.A universal law of procrastination "Throughout our lives we all are under pressure to deliver on deadlines. Yet we often have a substantial time window in which to complete the given tasks—for example, term papers, book chapters, tax returns. When during such a window do we deliver? And to what extent do we procrastinate? Increasing pressure forces us to finalize tasks. The closer we are to the deadline, the higher the pressure. To quantify things a bit, we could assume that deadline pressure is inversely proportional to remaining time. Such scaling behavior is well known in physics; for example, it describes how the electrostatic potential energy of a point charge depends on distance from the charge, or how the gravitational potential energy of a system of masses scales with distance between the masses. The scales look like 1/r, where r can be distance, remaining time, or some other factor. The corresponding mathematical function is a hyperbola. To give an example of the scaling using arbitrary and dimensionless units, if a deadline is 100 days away, the pressure to meet it is just 0.01. But if the deadline is tomorrow, the pressure shoots up to 1. As it turns out, that scaling may be universal when it comes to human behavior and perhaps reflects a universal law of procrastination (ULP). Cornelius König and Martin Kleinmann reported a hyperbolic “deadline rush” for a small set of fewer than 30 students preparing for exams over a 21-day period.1 As a program director at NSF, I was impressed by the tremendous increase in the number of proposals routinely submitted right before deadline as compared with those turned in earlier in the submission window. In analyzing large data sets from 10 annual submission windows of greater than 60 days with submissions from more than 1000 proposers annually, I have found that the data adhere to a modified hyperbolic function, as plotted in the figure. The model is simple, which means it omits factors such as delays introduced by the universities’ sponsored research offices. Nevertheless, the procrastination behavior is predicted quite well, and without any fitting parameters.

Proposed modified hyperbolic function reflecting a universal law of procrastination. The red line represents the full form of the law, which illustrates the hyperbolic scaling, N(t) is the number of submissions received by day t , M is the final number of proposals submitted, and D is the number of days in the submission window. According to the universal law of procrastination, N(t)=M/(D−t+C)−M/(D+C) , where C=½(D‾‾√·4+D‾‾‾‾‾‾√−D) helps improve the fit for small values of t . The second term in the right-hand side of the equation ensures that N(t)=0 at t=0 . Asymptote (not shown) is located at t=D+C . As is shown in the figure, the ULP curve provides a simple means of predicting the impact of proposal pressure and of estimating the number of proposals expected as a function of remaining time to deadline. Practical concerns for a receiving institution include how to handle the number of proposals received on the deadline date and whether that load will overtax or crash the existing computer infrastructure. Bear in mind, though, that hyperbolic functions diverge to infinity at the asymptote. To procrastinating submitters, the most critical issue is that by waiting until the deadline or close to it, they eliminate the time needed for identifying and correcting errors that could make their proposal ineligible for consideration." Related content: Tired of procrastination? Try pre-crastination!The geometry of their shells keeps turtles from getting stuck on their back.Flashback Friday: Clueless doctor sleeps through math class, reinvents calculus…and names it after herself.