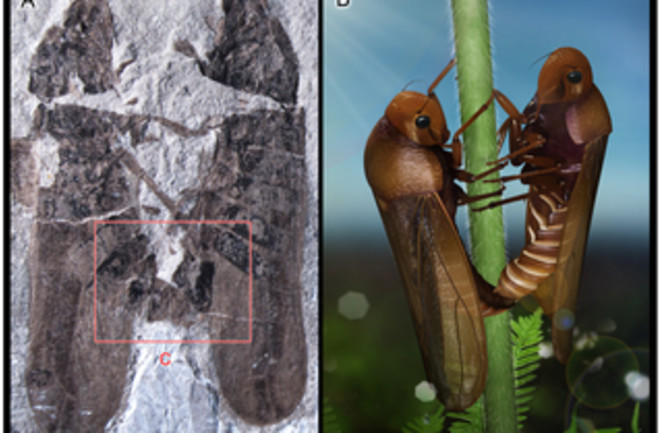 Talk about being caught in flagrante delicto – these  froghoppers somehow died while they were having sex, and they have now been doing the deed (in fossil form) for about 165 million years. In this paper, the archaeologists compare the bangin’ bugs’ positions to those of their living contemporaries, and find that “froghoppers’ genitalic symmetry and mating position have remained static for over 165 million years.” Insexy!

Forever Love: The Hitherto Earliest Record of Copulating Insects from the Middle Jurassic of China

Mating behaviors have been widely studied for extant insects. However, cases of mating individuals are particularly rare in the fossil record of insects, and most of them involved preservation in amber while only in rare cases found in compression fossils. This considerably limits our knowledge of mating position and genitalia orientation during the Mesozoic, and hinders our understanding of the evolution of mating behaviors in this major component of modern ecosystems.

Here we report a pair of copulating froghoppers, Anthoscytina perpetua sp. nov., referable to the Procercopidae, from the Middle Jurassic of northeastern China. They exhibit belly-to-belly mating position as preserved, with male’s aedeagus inserting into the female’s bursa copulatrix. Abdominal segments 8 to 9 of male are disarticulated suggesting these segments were twisted and flexed during mating. Due to potential taphonomic effect, we cannot rule out that they might have taken side-by-side position, as in extant froghoppers. Genitalia of male and female, based on paratypes, show symmetric structures.

Our findings, consistent with those of extant froghoppers, indicate froghoppers’ genitalic symmetry and mating position have remained static for over 165 million years.”