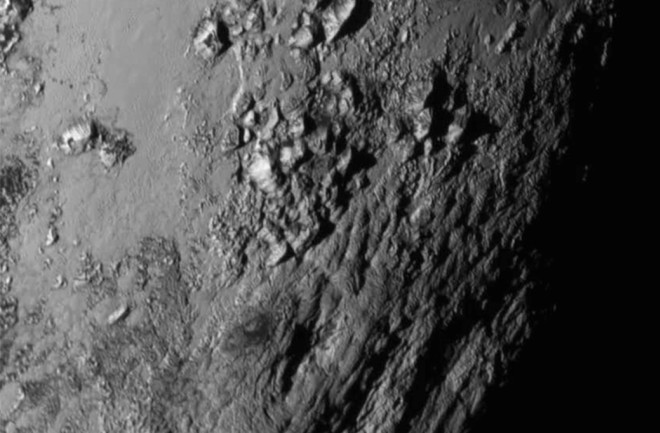 A range of youthful mountains rises as high as 11,000 feet above the surface of Pluto, as seen by the New Horizons spacecraft. (Source: NASA-JHUAPL-SwRI) Here they come now — the first incredible detailed images of the surface of Pluto. The image above was just published by NASA, and it shows an absolutely astounding landscape (to my eyes, anyway). In a discovery that NASA is calling a "giant surprise," New Horizons has found a range of youthful ice mountains rising as high as 11,000 feet above Pluto's surface. The mountains likely formed no more than 100 million years ago, which is extremely young compared to the 4.56-billion-year age of the solar system. Alan Stern, principal investigator on the New Horizons mission, compares these mountains — likely to be made of a bedrock of water ice — to the Rockies. As someone who lives at the base of those mountains, all I can say is: WOW! Looking at the image above, you'll also note that it does not look anything like the moon, whose surface is pockmarked by impact craters. On Pluto "we have not yet found a single impact crater, which means it is a very young surface," said Jeff Moore of the New Horizons’ Geology, Geophysics and Imaging Team, at a NASA press briefing today. That's surprising too, because Pluto has presumably been bombarded for billions of years by objects in the icy Kuiper Belt. So where did the craters go? They have likely been erased by geologic activity. The cause and nature of that activity is still not known. One thing is for sure: Gravitational tidal energy of the kind responsible for geologic activity on moons near giant planets like Jupiter is not to blame. That's because there is no giant planet near enough to Pluto to cause that. This will send "a lot of geophysicists back to the drawing board," Stern said. Geysers and volcanoes spewing nitrogen from the planet's interior are likely to be part of the geologic activity that is continually remaking the face of Pluto, according to Stern. But we'll have to wait for the analysis of more data to get answers to these intriguing questions. I wanted to get this image posted as soon as I could, so I'll leave it there — for now. I'll come back once NASA makes more images and information available.