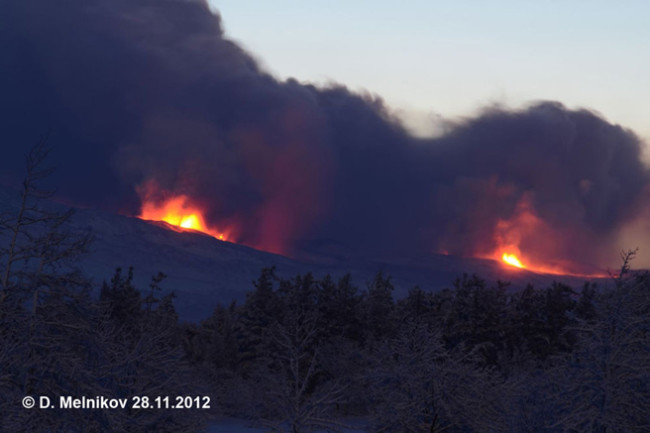 The two fissure vents from the November 27, 2012 eruption of Tolbachik in Russia. Image: Dmitry Melnikov, IVS FED RAS / KVERT I'm in California now, but I thought I'd write a brief post with an image of the Tolbachik eruption in Kamchatka. KVERT posted a few images today, including a show of the two fissures with accompanying ~3 km / 9,800 ft ash plumes. The description of the eruption indicates that it is centered in the southern cone area. The reports from observations on the ground suggest that it started as a series of discrete eruptions that coalesced into the two fissures -- a common occurrence for this style of eruptive activity (see Kilauea). This seems to suggest that Tolbachik is having an eruption similar in style to the 1975-76 eruptions -- however, the magnitude of this new eruption is still very unclear. There appears to be significant SO2 from this eruption as well, according to reports from the USGS/AVO. Unfortunately much of the news is in Russian and what little KVERT has released is,well, scant. However, the conditions have cleared during the last Terra/MODIS pass, so you can see the plume and hotspots from the eruption on the image (see below). 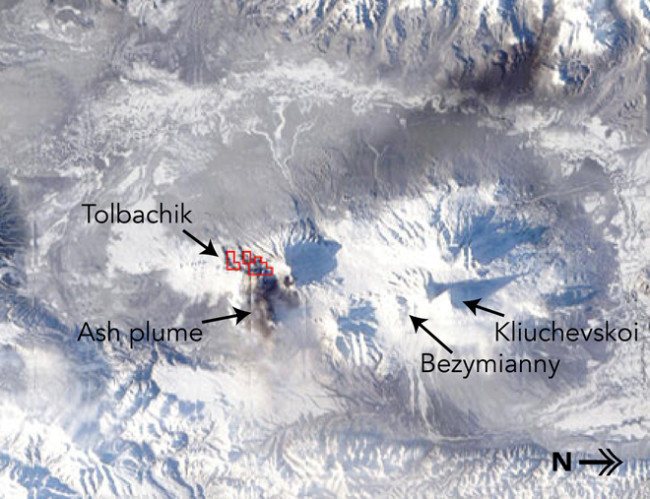