Finding the Hidden Volcanoes of Colombia 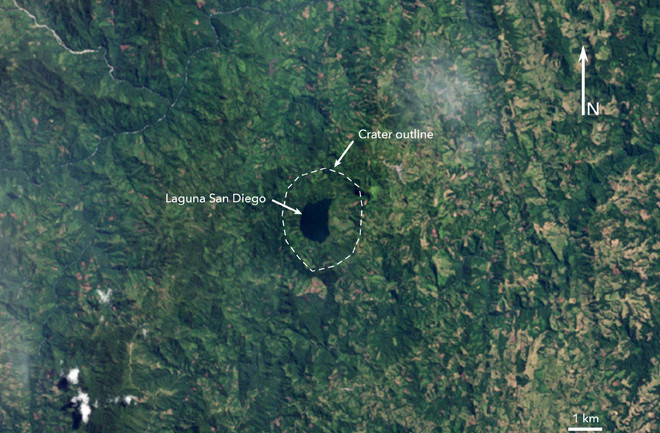 Laguna San Diego in Colombia, a maar volcano in the province of Caldas. Click here to see this image without the annotations. Image: Landsat 7, taken July 3, 2002 -- NASA Earth Observatory/USGS.Culture Volcans, a volcano blog (in French), alerted me to something interesting in Colombia. The Colombian geological survey, INGEOMINAS, is installing its first seismometer at the little-known volcanic area known as Laguna San Diego (or Volcan San Diego) in the province of Caldas. San Diego is one of the northernmost outposts of potential volcanism in Colombia and very little is known about the volcano -- and you'd likely miss it if you weren't looking. The Landsat 7 image of the area taken 2002 shows the lake that lies within a small crater whose rim has clearly been weathered and vegetated. The lake itself is small, only about a kilometer across and about 1.3 kilometers long while the crater in which the lake is nested is only ~2.5 by 3 kilometers. Perched on the edge is a small stratovolcano (or possibly a cinder cone) of unknown age known as Morro de San Diego. All in all, a fairly small geographic feature nestled in the mountains 90 kilometers southeast of Medellin. As I said, not much is known about Volcán San Diego -- and Culture Volcans did a great job in finding much of what could be found (check out the 3D model as well). INGEOMINAS, in their book "Introducción a la Geología con Ejemplos de Colombia" gives passing mention to San Diego, merely saying that it is a maar (more or less, an explosion pit produced by magma interacting with groundwater). However, it does represent the continuing effort to identify volcanic features and the importance of monitoring these features to make sure than a volcanic eruption never comes as a complete surprise to the people nearby. The volcano itself doesn't even appear in the Global Volcanism Program's database (or in my copy of Volcanes de Colombia), so volcanologists at the Volcano Observatory in Manizales are starting from scratch for San Diego. Typically, when you develop a volcanic hazard assessment for specific volcano, you like to know about its past eruptions and the baseline of "normal" activity. As the post by Culture Volcans rightly points out, we don't know either for San Diego, so by installing new equipment, INGEOMINAS volcanologists can start to create that baseline for the volcano. Now, if the volcano is really a maar, then it is likely what is called a "monogenetic" volcano -- that is, it has a brief period of activity, then won't erupt again. An example would be a cinder cone like Paricutin in Mexico that has a brief but intense life of active volcanism between 1943-1952. This isn't to say that there won't be another eruption within a few decades or centuries of the first eruption, but likely, the active lifespan of the volcano can be measured in years to decades. Now, if this monogenetic volcano lies within a volcanic field (like Paricutin within the Michoacán-Guanajuato field), then new monogenetic volcanoes might pop up nearby -- a place like Craters of the Moon in Idaho is a great example where there are generations of different monogenetic cones. Each had a relatively short life, but the volcanic field has a much longer lifespan, into thousands of years or more. So, by monitoring volcanic features like San Diego, even if the volcano itself might not erupt, we can get a warning if new activity could occur within a large volcanic field (note: with so little know about the volcano, it is unclear whether San Diego is a lone volcanic feature or within a great volcanic field).

Cerro Machin in Colombia, seen on October 11, 2008. Image: INGEOMINAS Even volcanoes that repeatedly erupt ("polygenetic") can be tricky to identify. To the south of San Diego is Cerro Machín (below), a heavily forested dacite dome complex that hasn't erupted in hundreds of years (that we are aware). The rapid vegetation of volcanic areas in a country like Colombia means the evidence of an eruption is hidden quickly. So, without the active monitoring of the seismicity under Machín, we would not know how restless the volcano remains, with constant small earthquakes at depth that could be related to magma moving tens of kilometers beneath the surface. Similarly, prior to its eruption in 2008, Chaitén in Chile looked like a forested dome that hadn't seen much volcanic activity in millennia. This lead to it not being closely monitored for a potential eruption, but as we all know, once it sprang back to life, it produced one of the largest eruptions of the past decade. So, this shows that keeping an eye on volcanic features that look like they might be long dead is worth doing in volcanically-active areas -- sometimes the largest eruptions come from places with no known historical activity. The keys to identifying potentially hazardous volcanoes are simple: installing seismometers to measure small earthquakes, usually the harbinger of an eruption and geologic field work in volcanic areas, to help identify volcanic deposits and correlate them with their sources. It might not be flashy, media-grabbing research, but it is vital if we want to fully assess the volcanic hazards of a particular region. If anything does happen at Laguna San Diego, it will be watched by the Volcano Observatory in Manizales, who is also in charge of more active volcanoes like Nevado del Ruiz and Tolima. The Colombian Geological Survey has done an excellent job of constructing a thorough volcano monitoring system, with three active observatory (in Manizales, Pasto and Popoyán). Thanks to this, we know a lot of every murmur from the multitude of volcanoes in the country -- and more are being added to the list.