Finding Meaning in the Chaos of Protein-Protein Interactions 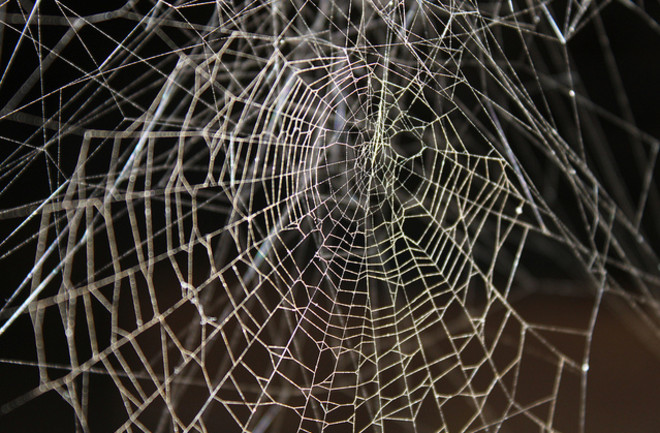 Protein-protein interaction networks can form complicated webs of interconnectedness (Image: Flickr/Susan Ujka). Proteins are the micromachines of the cell, catalyzing the reactions that make biology happen. Molecular reactants come in, and a distinct set of products emerges; in the process, energy is liberated, or cellular building blocks are shuttled along the assembly line. Spatial organization is a critical aspect of cellular reality - one that is rarely considered the central dogma (DNA —> RNA —> Proteins), whose elegant simplicity can overshadow biological realism. For example, a typical mammalian protein can be four orders of magnitude smaller than the cell in which it operates. Ensuring that one protein’s products find their way to the next protein can be a logistical nightmare considering the size and intense crowding of the cell interior. One way to improve your chances of a successful hand-off is to physically link metabolically related proteins. That way, products can be shuttled directly to the next reaction, with no time to spiral off into the chaotic intracellular milieu. In order to learn about pathway kinetics or reveal proteins involved in key enzymatic steps, the study of protein-protein interactions (PPIs) has been gaining momentum. Viewed from the other perspective, linked proteins can imply metabolic synergy and point to previously unknown associations among metabolic modules. All of these aims inform fundamental biological processes, with implications as wide-reaching as enhanced biofuel production or more efficient drug delivery. PPI experiments generally produce an intimidating web of interacting components, and separating the signal from the noise is an experimental and computational challenge. But a group of scientists led by Marco Hein, Anthony Hyman, and Matthias Mann has developed a clever system to not only capture these interactions, but also to quantify their occurrence and characterize their strength, as reported in a recent paper published in Cell. The approach involves single-step immunoprecipitation, where “bait” proteins are produced and chemically glued to a surface. Unsuspecting proteins that typically interact with the bait are immobilized as well; the rest of the protein pool is flushed away, leaving a set of associated proteins on the surface, like flies on flypaper. These trapped protein complexes are then analyzed by mass spectrometers, which measure mass fragments at extremely high, diagnostic precision. Typically, the bait proteins are produced at unnaturally high levels, which can simplify detection, but may render results less physiologically relevant. By expressing tagged bait proteins on a "bacterial artificial chromosome” - a large DNA construct that can carry hundreds of genes - the team was able to bring a suite of natural regulatory proteins along for the ride. That way, the actual quantity of bait protein is more representative of natural systems, an important factor that influences PPI dynamics. By scaling this idea up to express 1,125 distinct bait proteins from the human proteome, the team conducted 3,990 mass spectrometry runs, which, to get technical, represents an insane amount of data. Parsing the spectra to see above the analytical noise, they detected 28,504 interactions among 5,462 proteins. Among the interacting pairs: protein complexes essential for normal bone development, and cell division. Intriguingly, PPIs were retained even when a mouse-derived version of the bait protein was used, suggesting that protein function is well-maintained across mammalian species. Perhaps most striking was how common PPIs are. Most of them are relatively weak and likely transient, parameters that have previously been taken to mean “unimportant.” But a range of recent studies is suggesting just the opposite, that these temporary interactions can regulate broader processes or signal a change in the environment. These new dimensions of analysis are helping scientists decode the hidden crosstalk of the cell’s molecular machines.