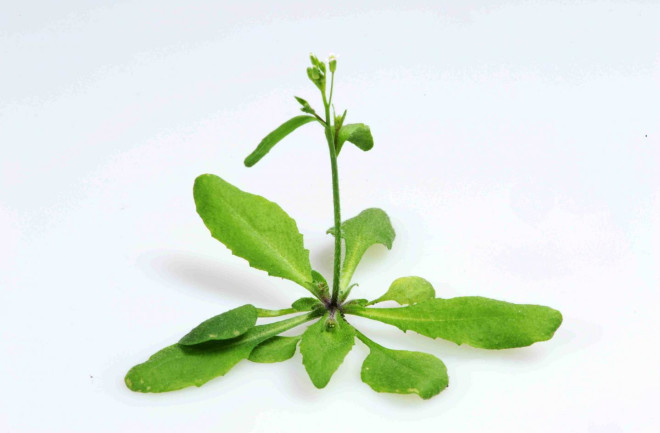 This is Arabidopsis thaliana, the plant species grown aboard the International Space Station and analyzed in this study. This work could support future efforts to grow food in space. (Credit: Eric Belfield)

Will future astronauts be able to snack on fresh space-grown produce? New research is advancing the study of plant growth in space, which may one day support humans living and growing their own food in space or on the surface of Mars.

Researchers at the University of Florida Space Plants Lab are analyzing tissue taken from plants that have spent their entire lives growing in the microgravity environment aboard the International Space Station. It’s revealing that plants can indeed grow off-world, but they face unique challenges that researchers are only now beginning to comprehend.

The team looked at which genes were being expressed in the plants at any given time by looking at what’s called the transcriptome — the RNA sequences, or genetic messengers, that are being made — and compared that to samples grown on Earth.

As corresponding author and principal investigator Anna-Lisa Paul said in an email, gene expression “provides an excellent readout of how the plant is responding to its environment. In a way, you can think of it as seeing the list of “tools” the plant is using to cope with the novel situation of spaceflight.”

In this study, published in the journal Applications in Plant Sciences, the team analyzed samples from the plant Arabidopsis thaliana (rockcress), a small flowering plant related to cabbage and mustard. They specifically studied the root apex, or tip.

“The very root tip acts a bit like a “brain” to help sense changes in the environment, and then send the signaling molecules to the right places to initiate changes that help get root growth back on track,” Paul said. “So, what if you have no gravity to help with that signal transduction? The root tip still acts as the central processing node in the root, and we can get insight into how the plant navigates in an environment without gravity to guide it by looking at the root tip transcriptome.”

There is still much to learn about plant growth in microgravity, but this study has helped identify some differences between plants grown in space and on Earth.

“We see many genes differentially expressed in spaceflight that are associated with cell wall remodeling and cell expansion. Plants also respond as if they are being challenged by certain stresses, even though the spaceflight environment does not really look as if it should be ‘stressful,'” Paul said. “Taken all together, it tells us that plants know they are in a strange environment, and although they can survive there, they need to work hard.”

This work and the study of plant growth in space will be important for future crewed missions to the space station, the moon and one day Mars. “We need to know how plants tick in a zero gravity environment, or any altered gravity environment, before we can be confident they will thrive on a mission to Mars,” Paul said.

While this study only explores how plant growth is affected by the space station’s microgravity, it also shows how plants might respond to altered gravity in general. Additionally, Paul suggests, understanding how to grow plants in the controlled, resource-limited environment on the space station could inform future efforts to grow plants in a contained environment on an alien planet.

Astronauts who travel to space currently do not have access to truly fresh produce. But, they are only aboard the space station for a relatively short period of time, get resupplied regularly and space agencies make a concerted effort to provide enjoyable food. Because of this, astronauts today have access to adequate meals and face no risk of running out of food. But this might change for astronauts aboard future crewed missions to the moon or on deep-space missions to Mars. Especially on Mars, the ability to grow food will be critical for astronauts who, otherwise, would have a finite food supply. The ability to grow produce on Mars would ensure sustainability for a mission and a healthy diet for crew members.