Fermi sees the gamma-ray sky for the first time

1) NASA's Gamma-ray large Area Space Telescope, neé GLAST, is now called Fermi! It was named after Enrico Fermi, a famous physicist who accomplished much in his life, including creating the first sustained nuclear chain reaction, proposing how cosmic rays -- subatomic particles with ferocious energy -- attained their incredible speeds, and having his name attached to the Fermi Paradox (OK, that's not really science, but still-- he asked, if aliens are common in the Universe, where are they?). When I worked on GLAST we speculated that might be the name eventually chosen, but I thought it unlikely since Fermi already has a lab named after him in Illinois. Guess I was wrong.

2) Fermi (nuts, guess I'll have to get used to that) has seen first light! The image is below, marked with some bright sources. 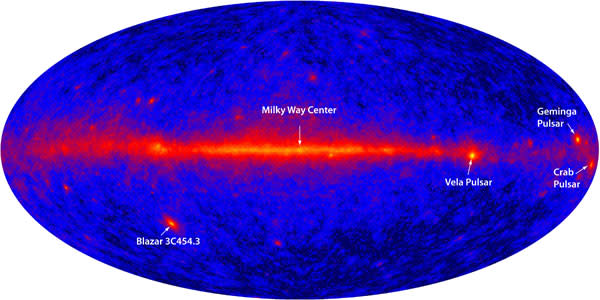 Fermi only sees super-high-energy gamma rays, which are photons of light just like the ones we see (visible light photons), but with millions or even billions of times the energy. Only very violent or energetic objects emit them: exploding stars, matter swirling around black holes, pulsars (&quot;dead&quot; stars with incredibly strong magnetic fields), and the like. In the image, there are several obvious sources, including the center of our Galaxy (where a four-million solar mass black hole resides), a few other galaxies with similar black holes, pulsars, and the plane of the Milky Way (where sources merge into a blurry glow).

Interestingly, there is a background glow everywhere. That is one of the things Fermi is meant to look into: are those individual distant galaxies all blurring together, or an actual diffuse glow caused by some unknown source? We may soon know.

Fermi also has a Monitor (hmm, which used to be called the GBM for &quot;GLAST Burst Monitor, so now it must be the FBD), which will see the flash of energy from gamma-ray bursts, the most violent events in the Universe. In the first month of operation, the FBD saw a burst roughly every day! This is fantastic news; it means we'll get even better statistics on these distant and creepy events. I'd go into detail, but (obsplug) my book on all this comes out in a couple of months, and it'll have more detail than you want. Trust me. If you're impatient, searching the blog might help.

As regular readers know, I worked on education and public outreach for Fermi back when it was still GLAST, so it's very exciting to see it not only flying, but performing so well! Seeing the first light image is very, very satisfying. And I'm very happy for all the scientists and engineers who worked on it. Congratulations to everyone!