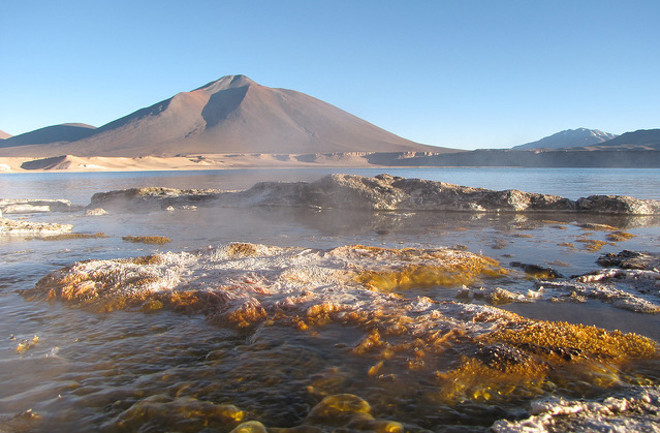 Temperature is frequently the most important factor in structuring biological systems. (Image: Flickr/sergejf) Being alive is a constant challenge. You have to find food, nutrients, and energy; you have to outcompete at least some of your pushy neighbors; you have to avoid being someone else’s lunch; and you have to deal with environmental challenges like radiation or toxic chemicals. Some of these obstacles are more challenging than others, disproportionately affecting an organism’s genome, physical distribution, and metabolic activity. And while things like food source or antibiotic resistance might seem like the most complicated, life-or-death challenges, two recent studies suggest that temperature is actually running the show as a prominent force in shaping one’s way of life. The idea that a narrow acceptable thermal window is a primary determinant of viability is a foreign concept for us humans, with our ability to thermoregulate both physiologically (sweating or the re-routing of central heating to vital organs) and technologically (warm ski lodges in the Alps). But for lower life forms, where internal metabolic kinetics are unbuffered by such adaptations, a few-degree shift in ambient temperature can be a killer. Marta Goberna and Miguel Verdu of the Centro de Investigaciones Sobre Desertificación in Valencia, Spain recently examined nearly one thousand different biological traits, ranging from the presence of certain genes to optimal growth pH, in order to determine which were most phylogenetically conserved. They hoped to figure out whether it would be possible to predict the nature of a given trait based solely on its position in a phylogenetic tree. Higher levels of predictiveness would indicate that such traits strongly influenced the evolutionary arrangement of the tree; lower predictive power would suggest otherwise. The traits with the most predictive power were environmentally tuned thresholds, like moisture level and, most notably, optimal growth temperature. These were traits that required many genes and gene regulators, all working together and finely tuned to a particular habitat. Given the energetic resources needed to pull that kind of concerted effort off, it seems reasonable that integrated traits like thermal sensitivity would play a large role in how genomes are organized. One-gene wonders, like antibiotic resistance, were more easily transferred horizontally between tree branches, scrambling the evolutionary signal. Skipton Wooley from the University of Melbourne, along with several colleagues, took a different approach to tracking how biology is structured, studying organisms on the ecosystem rather than the genomic scale. The team compiled 165,000 observations of brittle stars from more than 1,600 research expeditions, plotting the species distributions by coastal (0-20 m depth), continental shelf (20-200 m), upper continental slope (200-2,000 m), and deep-sea (2,000-6,500 m) seafloor zones. When comparing a number of longstanding hypotheses about factors that structure biodiversity, Wooley showed that energy availability was the most predictive variable. But not all energy is created equal: thermal energy (i.e., water temperature) dictates brittle star diversity patterns at depths shallower than 2,000 meters, but chemical energy takes over in the deep sea. The distinction likely derives from the near-constant temperatures in the deep sea, exposing an important Goldilocks zone within which temperature is the primary structuring factor. If temperature swings are non-existant (e.g., the deep sea) then there aren’t enough differentiable niches to exploit; if they’re too prominent (e.g., a spring diurnal cycle in Boston), biomolecules may not be able to efficiently “pick” a single temperature at which to operate. Temperature-dictated habitability makes an era of global climate change particularly tumultuous. As we’ve seen with coral reefs, Himalayan plants, and a range of other species, changing conditions are already destabilizing ecosystems. How new ecosystems will take shape - will everything move toward higher latitudes or higher elevations in a coherent way, or will new founder effects and different rates of movement lead to substantially different ecosystem dynamics? - is less clear. But with temperature emerging as a fundamental force on evolution and adaptability, dramatic changes are sure to come.