Feds: Finding an Incoming Asteroid is 1/20,000th as Important as Homeland Security

One effective way to measure the priorities of the U.S. government is to look at where it directs spending. So in the aftermath of the close passage of asteroid 2012 DA and the much more frightening (and impactful, in the literal sense) aerial impact of a large meteor over Russia, I took a look back at how funding goes to the detection of potentially harmful asteroids. The short answer: amazingly little. 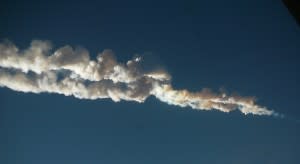 Trail of the large meteor, or bolide, that hit above Chelyabinsk, Russia. (Credit: Nikita Plekhanov) The leading ground-based search for new potentially hazardous asteroids is the Catalina Sky Survey at the University of Arizona, currently the recipient of a $4.1 million, three-year NASA grant to upgrade its facilities. NASA is also directing $5 million over the next five years to build up the new Asteroid Terrestrial-impact Last Alert System (ATLAS) at the University of Hawaii. Combined with some other, smaller grants to existing programs and to data analysis from older projects, the total comes to about $3 million a year. (It is hard to extract an exact number here, since "asteroid detection" is not broken out as a discrete federal funding category.) For comparison, the 2013 budget request for Homeland Security was nearly $70 billion, or more than 20,000 times as great. To be fair, there are other federal projects that support our understanding of asteroids and asteroid threats, such as the sky-monitoring PanSTARRS facility and NASA's upcoming big-budget OSIRIS-REx mission to asteroid 1999 RQ36 (more of a planetary science project than a planetary protection project, but related all the same). On the other hand, Homeland Security is a small fraction of the proposed $614 billion US defense budget, and there are many other federal programs that support various kinds of disaster-related research and mitigation. Even the new ATLAS project will not be able to detect incoming objects smaller than about 50 meters (150 feet), so the Russian meteor--now estimated to have been about 15 meters across before it reached Earth's atmosphere--would not have shown up. If you want to know why we don't have any facility capable of providing an early warning of such city-rattling meteors, just follow the cash. Asteroid detection currently accounts for about one millionth -- that's right, 1/1,000,000th -- of the total federal budget.