Fails at Fusion; Succeeds at Schooling

Scientists are looking closer at brown dwarfs to learn more about the formation of stars and planets. 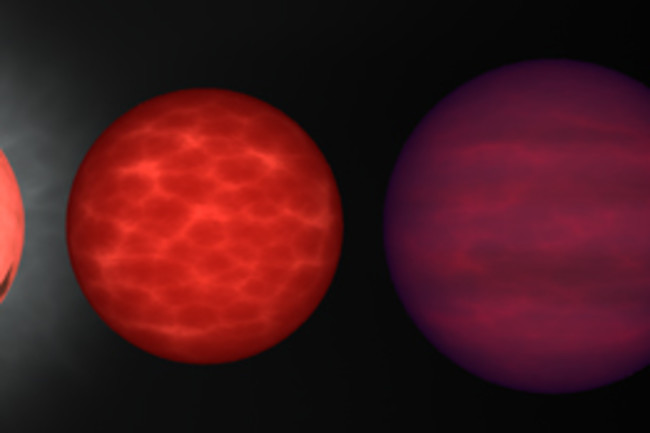 An illustration of a low-mass star, two brown dwarfs, and Jupiter, compared with the sun (far left). | NASA/PAC/R.Hurt (SSC)

Not every stellar wannabe has what it takes to fire up an internal nuclear reactor—some gassy balls are just too puny to fuse hydrogen into helium in their cores. These failed stars, or brown dwarfs, inhabit a peculiar gray area between large planets and small stars, and their split personalities are providing scientists with new ways to learn about both kinds of objects.

In April an international team announced that it had found a brown dwarf just nine light-years away, the closest one ever detected. That dwarf is also the coolest starlike body ever observed, with a temperature of just 350 degrees Fahren­heit, more suitable for baking cookies than fusing hydrogen. Caltech astronomer Davy Kirkpatrick, who works on related research, says that brown dwarfs like this one seem to have compositions similar to those of the giant planets detected orbiting faraway stars. Such planets are difficult to study directly, so data from dwarfs might serve as a stand-in, helping astronomers model planet formation. “It’s hard to observe exoplanets because there’s a star in the way,” he says, “but brown dwarfs are very similar, and you can see them in isolation.”

Penn State astronomer Kevin Luhman has already unearthed some surprises in his observations of brown dwarf systems. In May his team spotted a planet-size object (its exact classification is still uncertain) orbiting a brown dwarf that is only a million years old; in contrast, Earth needed at least 10 million years to coalesce, suggesting that “nature has two very different ways of making small companions to stars,” Luhman says. Whereas Earth is thought to have formed by the gradual gravitational accretion of material long after the sun formed, the brown dwarf and its consort may have formed almost simultaneously. Other astronomers are examining the smallest known brown dwarfs—which are around 10 times as massive as Jupiter—to determine the minimum mass needed for gravity to pull a pocket of gas and dust together to form a star.

Nearly 1,000 brown dwarfs have been spotted so far, and a survey by the recently launched WISE (Wide-field Infrared Survey Explorer) satellite should soon give astronomers thousands more such objects to study.