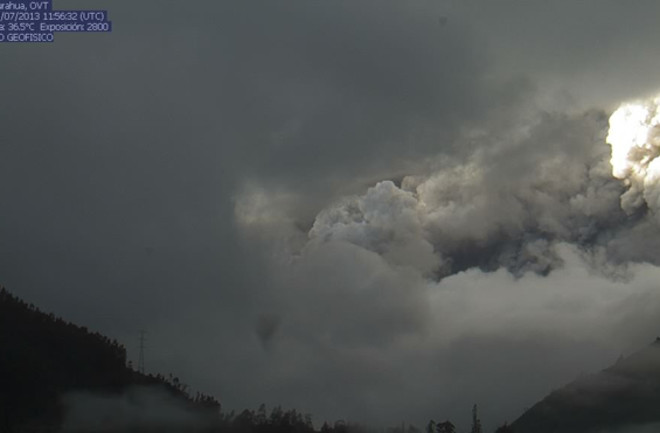 Webcam capture of the July 14, 2013 explosive eruption of Tungurahua. Clouds obscure some of the view, but possibly pyroclastic flows are seen in the image. Image: IG EPN Ecuador's ever-active Tungurahua had a significant explosive eruption this morning (July 14), producing an impressive ash plume that could be spotted in Quito (135 km away) and pyroclastic flows. The report from the Washington VAAC has ash as high as FL450 (~13 km / 45,000 feet). The eruption was also caught on weather satellite images of the area (see above), spreading to the northeast of the volcano. The pyroclastic flow threat has prompted the Ecuadoran government to evacuate people living nearest to the volcano as well. The explosion was confused with gunfire in towns as distant ~50 km from the volcano and ash from the eruption was falling on towns around Tungurahua as well and a sharp increase in volcanic material in streams and rivers leading from the volcano has also been noticed -- mainly ash and gravel, likely tephra (volcanic debris from an explosive eruption). You can see the explosion occur on this two loops of NOAA/NESDIS satellite imagery, one showing the IR loop (animated GIF), with the heat from the ash clearly visible as the explosion happens (top below) and the visible ash cloud (animated GIF - or see still image below) spreading mainly to the north but dispersing quickly after then initial explosion . Both of these loops suggest that the explosion was somewhat of an ephemeral event likely related to the destruction of a lava dome or plug.

The ash plume from the July 14, 2013 eruption of Tungurahua -- be sure to look at the satellite image loop to see the plume develop as well. Image: NOAA/NESDIS You can try to catch a glimpse of the eruption through the low clouds on one of the 7 webcams that IG-EPN has pointed at Tungurahua.