Explosions at Kilauea's Summit Have Intensified 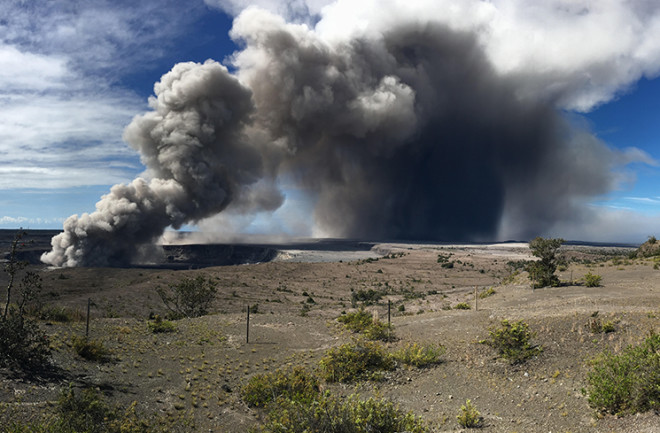 The ash and steam plume from Kilauea's Halema'uma'u caldera at the summit, seen on May 15, 2018. Image: USGS/HVO. It seems like every day since the Leilani Estates eruption began, Kilauea has thrown something new at the people of Hawaii. The new fissure 17 that opened over the weekend has produced a lava flow that has traveled more than 2 kilometers (1.2 miles). However, the news today now comes from the summit of Kilauea in the Halema'uma'u caldera, where the explosive eruptions (see above) have now gotten more intense and are likely to continue.

If you want a live view of the current ash plume eruption from the #Kilauea summit, here is a live feed: https://t.co/95kptli9Ghpic.twitter.com/4prQviunEx

could become larger than we have seen in almost a century now that the lava lake level has dropped below the water table. Today, the summit released a number of ash-rich plumes

(see above) that reached ~1-1.2 kilometers (3,000-4,000 feet) over the volcano, spreading ash across Ka'u Desert. The plume is an intermittent mix of brown volcanic ash and white steam (formed from the water seeping into the lava lake). The Washington Volcanic Ash Advisory Center (VAAC)

shows the ash drifting to the southwest

towards Southpoint. UPDATE 7:40 PM ET May 15: The USGS has raised the aviation warning status at Kilauea to Red. In their latest update: "Ashfall and vog (volcanic air pollution) has been reported in Pahala, about 18 miles (27 km) downwind. NWS radar and pilot reports indicate the top of the ash cloud is as high as 10,000 to 12,000 feet (3-3.6 km) above sea level, but this may be expected to vary depending on the vigor of activity and wind conditions." Check out the brief video below of the dark grey plume from the volcano.

So far, the new explosive eruptions has not any air travel to Hilo or Kona, but that could change in the wind directions change. The real hazard for ash

is for people near the summit where the potential to inhale ash is higher. With ash, it is vital to cover your mouth and nose with a mask or damp cloth to keep from breathing is what is tiny volcanic glass shards. Meanwhile, in the lower East Rift zone, we may be up to 20 fissures opened

since the eruption began. The latest is by Lanipuna Gardens, just to the east of Leilani Estates. Sulfur dioxide emissions

to avoid the area. All these event mean that more than 2,000 people may need to be evacuated as lava flows encroach on more homes and could potentially block escape routes.

One thing to note: hats off to the scientists at the Hawaiian Volcano Observatory

of Leilani Estates -- which it did this weekend. They also told us that more explosive eruptions

could start happening at the summit, and sure enough the volcano started puffing away at Halema'uma'u.

Before and after: Satellite images show devastation of the Leilani Estates neighborhood from Hawaii volcano https://t.co/bczU5qpe2mpic.twitter.com/pM285fwWj9

Forecasting volcanic eruptions is challenging, but professional actions of the HVO staff has meant that so far, we have seen no injuries or deaths due to the eruption. People have had warning to evacuate long before the hazard was extreme. The combined efforts of land-based monitoring like seismometers

and real-time views from webcams

all meant that these geoscientists to make accurate projections of the potential events that could follow. If anything, it is a testament to modern volcanology and how much we need to have capabilities to monitor all volcanoes in the U.S., so when volcanoes like Hood in Oregon or Rainier in Washington awaken again, we can be just as ready.