Explosion in Argentina following a "ball of fire from the sky"

[Update: It looks like the cause of this was a gas bottle exploding, and not a meteorite. See the update for 21:15 UT below).] A deadly explosion and fire occurred in Argentina overnight, reportedly killing one woman and injuring several others. Two homes, a store, and several vehicles were destroyed or damaged. 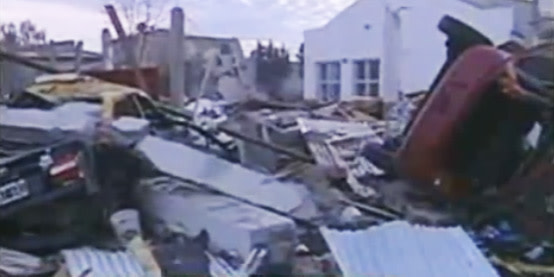 The thing is, while it's not clear what caused this incident, several people said

they saw a ball of fire descend from the sky when it happened.

Neighbors’ accounts describe a ball of fire coming from the sky as the cause of the explosion. The chief of the firefighters, Guillermo Pérez, however, said the "causes remain unknown" and that "gas containers were found intact," ruling out a gas related incident.

Other reports are similar

; in that article the ball of fire was described as being blue. I know a lot of folks will think this was caused by a meteor, but it's a bit early to run with that yet. For one thing, it could've been a small plane on fire, for example; this happened very early in the morning (2:00 a.m.), and from the reports I'm seeing it's not clear if the witnesses were already awake when they saw this or were awakened by it. Eye witness reports are notoriously unreliable, and it can't help if the witnesses were suddenly woken up.

[Update (17:30 UT): This is looking less like a meteorite to me; this news story has a witness saying he saw the blue fire after hearing the explosion, and after he went outside to see what was what. Thanks to JoseManuelp2 for the link.] 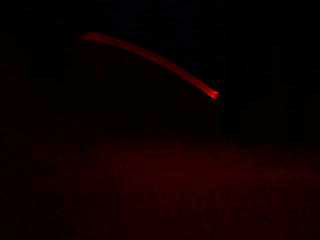 As testament to that, I'm seeing some reports that the ball was red, and a picture was posted to the imaging site yfrog

claiming, without any any supporting evidence, to be a shot of it. I include it here; note it's very dark, out of focus, and very low resolution (from the pixelation). I have no clue what this picture shows, but I have my doubts it's a fireball. I expect we'll be seeing lots of rumors and things like this today.

[Update (21:15 UT): The image shown here of the red fireball is a hoax, and the man responsible for it has been arrested. Also reported in that link is that there were gas bottles secretly hooked up to a pizza making stove in a nearby house, and that this may be the cause of the explosion. I expect that is the final straw on this story -- enough evidence is piling up that this was not something form space, or even from the sky; it was some kind of terrestrial event, as expected.]

The explosions and devastation appear to be very real, though. This is the only video I could find on YouTube, and it has no audio, but it shows the aftermath:

I don't see any obvious airplane wreckage, but it's hard for me to see that a meteorite impact would've done this; for it to have been big enough to cause this much devastation, there would've been a big crater as well (like the one that hit in Peru

a couple of years back). None is evident, so I'm strongly of the opinion something more terrestrial was to blame here. I won't be surprised to hear people asking if this was from the UARS satellite, too. However, that's pretty much impossible; the satellite came down Friday night

, and there couldn't have been pieces of it still in orbit two days later. Also, again, the type of destruction seen here is unlikely to have been from just a simple impact. Hopefully we'll find out soon. If you hear anything please leave a comment below (with a link if you have one), and I'll post an update when I learn more.

[Update: A grass fire in Texas Saturday night has been reported, and it's claimed to be linked to something falling from the sky. Again, a meteorite is extremely unlikely there, since it would take a big impact to ignite fires. Stuff like this happens all the time, and remember Texas is extremely dry right now. I would guess this was fireworks, but there's not much info on this story either. Thanks to Baron Grim on Twitter for the story.]